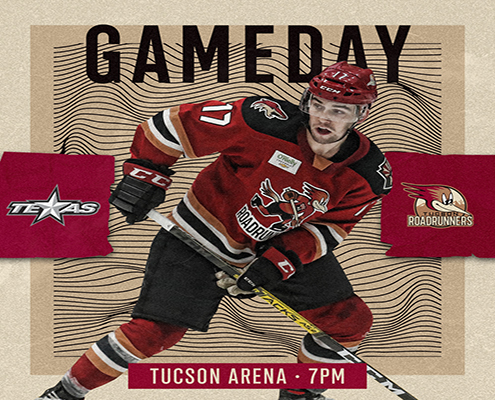 The Tucson Roadrunners continue their home series with the Texas Stars Friday night, playing the second of three games against the Stars this weekend. Tucson will be looking for a win to even the series after falling to the Stars 5-2 Wednesday night at the TCC.

Three Things
1) Tucson Roadrunners forwards Lane Pederson and Michael Bunting each notched multi-point performances in Wednesday night’s matchup with the Texas Stars, increasing their point totals to eleven apiece. They lead the Roadrunners in total points and are in a five-way tie for second in the AHL.

2) Tucson is one of only four teams in the AHL to have multiple players with double-digit point totals so far on the season (Michael Bunting and Lane Pederson). They have accomplished this feat in the fewest number of games compared to the other three teams, Chicago, Toronto, and San Diego.

3) Roadrunners defenseman Kyle Capobianco returned to the Tucson ice for the first time in nearly a year Wednesday night versus the Texas Stars. Capobianco, a three-time AHL All-Star, spent the start of the 2021 season as a member of the Arizona Coyotes after leading qualified AHL defenders in points-per-game last season. He joined the Roadrunners roster prior to the team’s road series with Colorado last weekend, recording a multi-point night in Tucson’s 4-3 comeback overtime victory over Colorado last Friday.

What’s The Word?
Roadrunners forward Lane Pederson on the importance of special teams play throughout the season:

“You want to try to win the special teams battle each and every night. A good goal we shoot for each season is 20 and 80 [power-play percent and penalty-kill percent], to make that full one-hundred percent.”

Number to Know
12 – The number of goals scored by the Tucson Roadrunners’ top forward line of Michael Bunting, Lane Pederson and Kevin Roy. The trio has combined for a total of 31 points. Their 12 goals account for over half of the team total through the first eight games this season.