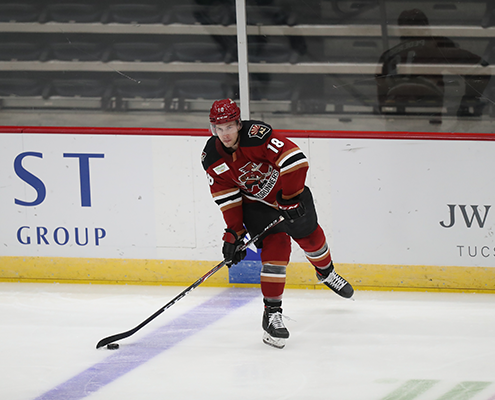 Tucson, Arizona – The Tucson Roadrunners were back at the Tucson Convention Center Wednesday night for their first official home game of the season. Tucson would fall to the Texas Stars 5-2, after a four-point outing by Stars Captain Cole Schneider.

Tucson went on the penalty-kill early in Wednesday night’s contest, as Kyle Capobianco was sent to the penalty box early on a slashing call. This led to a Texas Stars goal and an early 1-0 lead for the Stars. Tucson went on a pair of power-plays later in the period, but couldn’t capitalize, and the score was still 1-0 after the first 20 minutes. Texas added another power-play goal midway through the second period, Stars Captain Cole Schneider’s second tally of the night. Schneider would earn his third point of the night, an assist, on Josh Melnick’s shorthanded goal late in the second period. The Roadrunners entered the third period looking for some comeback magic reminiscent of the Arizona Coyotes’ performances last week against Anaheim. It looked as if the clock had struck midnight, as Texas added another goal less than a minute and a half into the period to make it a 4-0 contest. Lane Pederson and Kevin Roy would give the Roadrunners their first goals in over five periods to end the scoring drought, but it would not be enough as the Roadrunners fell to the Stars 5-2.

The Roadrunners continue their three-game series with the Texas Stars Friday night at 7:00pm MST. You can listen to the game in Tucson on FOX SPORTS 1450 AM and on the iHeart Radio app or watch the game on AHL TV.

LEADERS OF THE FLOCK – Tucson Roadrunners forwards Lane Pederson and Michael Bunting each notched multi-point performances in Wednesday night’s matchup with the Texas Stars, increasing their point totals to eleven apiece. They lead the Roadrunners in total points and are in a five-way tie for second in the AHL.

Watch as Tucson Roadrunners forward Lane Pederson buries the puck in the back of the net for his third goal of the season. Pederson picked up a goal and assist Wednesday night to join Michael Bunting atop the team lead with 11 points.

Defenseman Kyle Capobianco returned to the Tucson ice for the first time in nearly a year Wednesday night versus the Texas Stars. Capobianco, a three-time AHL All-Star, spent the start of the 2021 season as a member of the Arizona Coyotes. He joined the Roadrunners roster prior to the team’s road series with Colorado last weekend.