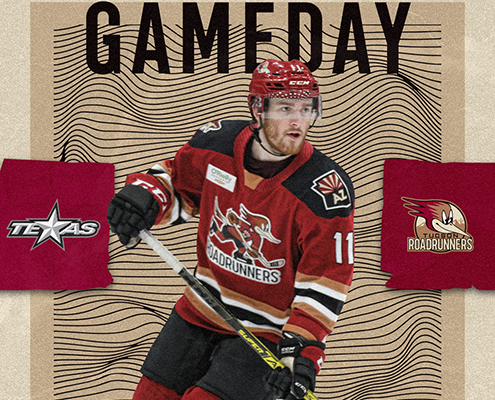 The Tucson Roadrunners return to Southern Arizona for their first official home games of the season, taking on the Texas Stars in a three-game set beginning Wednesday, March 3. Tucson enters the series at 5-2, while the Stars are sitting at 4-3. Tucson is one of four teams in the AHL with at least 10 points in only seven games, and the only team within the Pacific or Central Divisions.

Three Things
1) The Tucson Roadrunners will be facing the Texas Stars this week for the first time this season. The Stars are currently 4-3, tied for second in the Central Division. Texas has an even goal differential of 25 scored and 25 allowed. The Roadrunners went a perfect 2-0 against the Stars last season outscoring them 5-1, playing both games in Texas.

2) Three-time AHL All-Star Kyle Capobianco returned to the Tucson Roadrunners last week and was a major piece in the Roadrunners’ 4-3 comeback overtime victory Friday night. Capobianco had three assists and the equalizing goal, which came with fourteen seconds left in regulation. Meanwhile, Connor LaCouvee made his first start for the Roadrunners Saturday night, making 36 of 37 saves. LaCouvee spent last season with the Maine Mariners of the ECHL and split the 2018-19 season between the Utica Comets and Laval Rocket in the AHL.

3) The Roadrunners were a perfect five-for-five on the penalty-kill Saturday night against Colorado, improving to 24/26 on the season, good for second-best in the AHL behind the Lehigh Valley Phantoms. Their 18.2 power-play percentage ranks second in the AHL Pacific Division as well.

“[Ivan and Chris] are two great goal partners. Both great goalies, great guys, easy to talk to and approachable. They both work hard, both set good examples, they’re great teammates. I can’t say enough good things about them.”

12 – The number of games the Tucson Roadrunners currently have scheduled for the month of March. This includes eight home games, starting with Wednesday’s series opener with Texas. After the weekend series, Tucson’s next eight games will either be against the Ontario Reign or San Diego Gulls. All games can be heard on Fox Sports 1450 AM, and the iHeartRadio app. Games will also be broadcast on AHLtv.