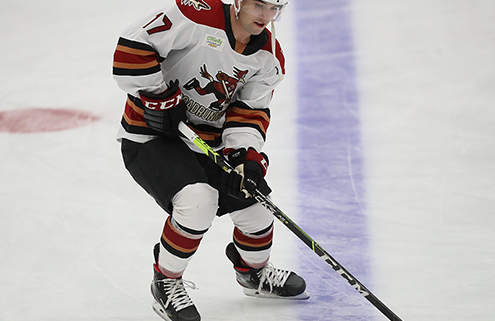 Fan Update
The Tucson Roadrunners and Team President Bob Hoffman have provided the below update regarding fan attendance at Tucson Arena.

“It’s exciting to see more and more venues all across the country bringing fans back to sporting events and we are eager to do the same. We have presented to Pima County a plan that puts the health and safety of fans, players and staff first and foremost. We are anxious to keep working with them to continue this process. We will let our season ticket members know as soon as possible when we are able to welcome them and other fans back to Tucson Arena for Roadrunners hockey. Our hope is that day is approaching quickly!”

Where We Stand
The Tucson Roadrunners are currently 5-2-0-0 and locked in for second in the AHL Pacific Division with a .714 winning percentage. The team is fresh off of a three-game road series with the Colorado Eagles, coming away with one win and five of the final nine goals in the series.

Quickly Making an Impact
Three-time AHL All-Star Kyle Capobianco returned from the Arizona Coyotes last week and was a major piece in the Roadrunners 4-3 comeback victory Friday night. Capobianco had three assists and the equalizing goal, which came with fourteen seconds left in regulation. Connor LaCouvee made his first start for the Roadrunners Saturday night, making 36 saves on 37 shots. LaCouvee spent last season with the Maine Mariners of the ECHL and split the 2018-19 season between the Utica Comets and Laval Rocket in the AHL.

Back at the Nest
The Roadrunners are back at home and set to play their first official home games this week. They will take part in a three-game series with the Texas Stars starting with the series opener on Wednesday, March 3 at 6:30pm. The game is available on Fox Sports 1450 am, the iHeartRadio app, and AHLtv. Saturday’s game can be seen on The CW Tucson at 7 p.m.

Who’s on the Schedule
The Roadrunners will be facing the Texas Stars this week for the first time this season. The Stars are currently 4-3, tied for second in the Central Division. Texas has an even goal differential of 25 scored and 25 allowed. The Roadrunners went a perfect 2-0 against the Stars last season outscoring them 5-1.

Reading With a Purpose
The Tucson Roadrunners will celebrate Roadrunners Reading Day on Tuesday with Bookmans Entertainment Exchange. Roadrunners Goaltender Connor LaCouvee will be reading the Dr Seuss book There’s a Wocket in my Pocket at 7 p.m. Tuesday in a YouTube Premiere. The Roadrunners have also teamed up with Bookmans Entertainment Exchange to offer Roadrunners Reading Packs while supplies last at all three Tucson Bookmans locations from 3 p.m. – 6 p.m. Tuesday for children ages 4-12. Children must be present at Bookmans to collect their reading packs. Roadrunners mascot Dusty will be present at the Bookmans East located at 6230 East Speedway from 3:30 p.m. – 4:30 p.m. on Tuesday. For full details and participating locations, please refer to TucsonRoadrunners.com.

Around the Pacific Division
After another week of AHL action, the Roadrunners are still in the top three of the division, sitting at 10 points. Henderson and San Diego entered the week atop the Pacific Division and faced off against each other in Las Vegas. Henderson swept the three-game set, outscoring the Gulls 11-6. The San Jose Barracuda took two-straight games over the Ontario Reign in their first games within San Jose city limits. Meanwhile, the Bakersfield Condors have not had a game since February 20. Their next game is scheduled for Wednesday, March 3 versus San Jose.

Did You Know?
While the Tucson Roadrunners were facing off with the Colorado Eagles in Loveland this weekend, the Arizona Coyotes were in Glendale taking on the Colorado Avalanche. Likewise, the Vegas Golden Knights and Anaheim Ducks were in Anaheim, while their affiliates, the Henderson Silver Knights and San Diego Gulls were playing in Las Vegas.