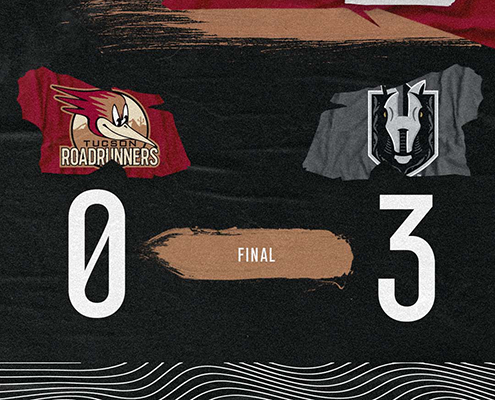 ROADRUNNERS LIMITED BY PENALTIES, FALL 3-0 TO SILVER KNIGHTS ON THE ROAD

Las Vegas, Nevada – The Tucson Roadrunners went on the road for only the second time this season to take on the Henderson Silver Knights in Las Vegas. Henderson jumped out to an early lead and never looked back, defeating the Roadrunners 3-0. Goaltender Ivan Prosvetov returned to the Roadrunners from the Arizona Coyotes, started in net, and made 26 saves.

Henderson jumped out to an early 1-0 lead in the first three minutes of action after the Roadrunners were unable to clear the puck from the defensive zone, giving the Knights a second chance on Tucson goaltender Ivan Prosvetov. Prosvetov flashed the glove with some stellar saves to limit the damage in the period, but Henderson added to their lead with a power-play score with six and a half minutes remaining in the opening frame. Tucson went on the power-play at the end of the first period, carrying it over to the second period. The teams each traded an additional chance on the power-play, but nothing came of it. After the second period the score remained at 2-0 in favor of the Silver Knights. Tucson had more than doubled the shot total of their opponent in the middle frame, firing off nine shots as opposed to Henderson’s four. Tucson saw more offensive opportunities in the first half of the third period but were called for four-straight minor penalties in the final nine minutes of regulation to limit their chances at mounting a comeback. Henderson capitalized on a five-on-three power-play that resulted from those penalties to take a 3-0 lead, which ended up as the final score from the Orleans Arena Friday night.

“I thought our response was pretty good in the second period… we did a lot of things right and had a lot of good chances. We built some momentum there but a few of those [chances] didn’t go in and we took some penalties in the third. There’s not much you can do there, trying to put goals on the board when we’re down a man for four or five minutes.”

The Tucson Roadrunners newest forward Terry Broadhurst on the team’s response after falling behind 2-0 in the first period Friday night against the Henderson Silver Knights.

IVAN BACK IN NET – The Tucson Roadrunners had a familiar face back in net tonight, as netminder Ivan Prosvetov made his return from the Arizona Coyotes. The 22-year-old has started one game for the Coyotes this season, where he made 23 saves. Prosvetov is now 2-2 on the season for Tucson with two shutouts.

Watch a pair of Tucson Roadrunners goaltender Ivan Prosvetov’s impressive saves Friday night against the Henderson Silver Knights in Las Vegas. Prosvetov made his first start with the Roadrunners since being recalled by the Arizona Coyotes on October 27 and stopped 26 shots in the contest.

32-year-old forward Terry Broadhurst made his Roadrunners debut Friday night in Las Vegas, after joining the roster earlier in the week. Broadhurst becomes the most experienced player on the Roadrunners roster with over 450 professional games played. He also has played with five previous AHL teams dating back to the 2011-2012 season: Rockford, Chicago, Cleveland, Bridgeport, and Charlotte.