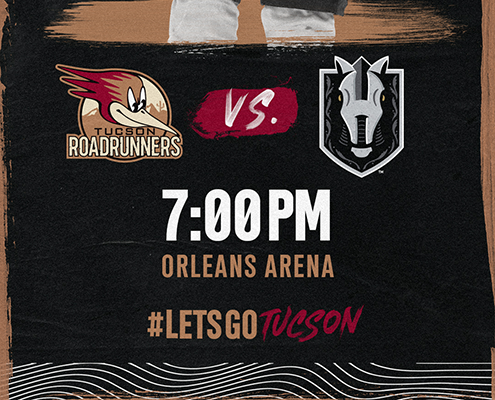 The Tucson Roadrunners head out on the road for the second time this season, this time to Las Vegas to clash with the Henderson Silver Knights in a two-game series Friday and Saturday nights at the Orleans Arena. The Roadrunners are coming off a 6-4 win last Saturday over their I-8 Border Rivals, the San Diego Gulls. The Roadrunners set a season-high for goals scored in the game, tied for second in the AHL for goals in a game by a team. The Silver Knights are wrapping up a five-game home stand with a 1-2 record so far, after splitting a two-game series with the Bakersfield Condors and falling to the Ontario Reign on Wednesday.

Three Things
1) The Roadrunners are adding a pair of veteran players with impressive resumes for their series with the Henderson Silver Knights. Joining the goaltender rotation is Zane McIntyre, who has an all-time AHL record of 112-63-17, including finishing in the top five in the AHL in wins three of the last five seasons. McIntyre was a member of the Providence Bruins from 2015 to 2019 while current Roadrunners General Manager John Ferguson was the GM for the Bruins AHL affiliate. The 29-year-old posted an 11-3-3 record last season as a member of the Lehigh Valley Phantoms. On the other side of the ice, forward Terry Broadhurst will bolster the Roadrunners offense, becoming Tucson’s most experienced player on the roster with 450 pro games played, including 292 in the AHL with Rockford, Cleveland, and Bridgeport. 20-year-old forward Ben McCartney has been assigned to the Arizona Coyotes, and his first appearance with the team will be his NHL debut. In addition to McIntyre, goaltender Ivan Prosvetov has rejoined the Roadrunners from the Arizona Coyotes.

2) Less than two weeks after recording his first professional hat trick, forward Ben McCartney has earned his first call-up to an NHL roster. The 20-year-old was recalled to the Arizona Coyotes Thursday afternoon and his first appearance with the team will be his NHL debut. In the Roadrunners Home Opener against the Texas Stars, Ben McCartney recorded the final three goals in a 4-0 victory over the Stars for his first professional hat trick. McCartney becomes the fifth player from Tucson’s Opening Night roster to be recalled just 20 days into the season. With him and Cam Dineen still waiting to make their NHL debuts, they will mark the second and third Roadrunners this season to make their NHL debuts, as well as the 40th and 41st in team history to play for both the Roadrunners and Coyotes.

3) The Roadrunners are returning to Las Vegas after a pair of preseason games with the Silver Knights. Tucson won both games at the Orleans Arena, outscoring Henderson 7-3. The first game saw all three Cams on the roster score a goal. Defensemen Cam Crotty and Cam Dineen opened the scoring with a pair of goals 1:20 apart, and Cam Hebig followed up with another goal to push Tucson’s lead to 3-0. The Roadrunners took one trip to Las Vegas last season, putting up a 1-1-1 record against the Pacific Division runners-up.

What’s The Word?
Tucson Roadrunners forward Hudson Fasching on going for back-to-back wins for the first time this season Friday against Henderson:

“It’s just about staying the course. It’s good for us as a team to learn through these ups and downs. We’re a young team, it’s going to be a learning process for us to maintain and be steady throughout.”

Number to Know
12 – The number of Roadrunners players to appear in all six games so far this season. Five of the 12 players are new to the Tucson roster this season: Liam Kirk, Matias Maccelli, Vlad Kolyachonok, JJ Moser, and Travis Barron, while six of the 12 have recorded a goal.

We’re Doing It Live
Tonight’s game will be broadcast live on AHLtv, as well as on the radio on Fox Sports 1450AM, or on the iHeartRadio app. Coverage begins at 6:45 p.m. MST with Roadrunners Warm-Up, as Jimmy Peebles gets you ready for the game before “Voice of the Roadrunners” Adrian Denny has the call at 7:00 p.m. live from the Orleans Arena in Las Vegas.