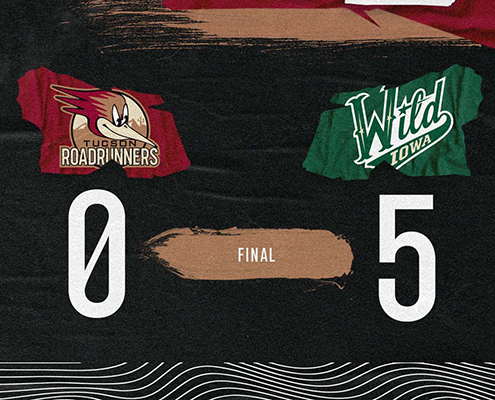 Des Moines, Iowa – The Tucson Roadrunners traveled to the state of Iowa to face the Wild for the first time since December of 2019, suffering a 5-0 in the first of two games with the Minnesota Wild affiliate this weekend in Des Moines. Ivan Prosvetov made his seventh start for the Roadrunners this season and stopped 29 shots. Tucson drops to 11-2 all-time against Iowa and was previously 6-0 at Wells Fargo Arena.

The Wild jumped out to a 1-0 lead with just over three and a half minutes gone by in the first period, off the stick of Kyle Rau, his fourth goal of the season and first of the contest. Rau added his second goal of the night almost 13 minutes later, pushing Iowa’s lead to 2-0. The Roadrunners were able to deny the Wild on the power-play, after being called for a slashing penalty shortly after the second Rau goal and headed into the second period faced with a 2-0 deficit. The Wild didn’t waste any time extending their lead in the second period, however, with another goal just two and a half minutes into the middle frame to make the score 3-0. Iowa added another goal, this time on the power-play, three and a half minutes later to make it a 4-0 game. Roadrunners goaltender Ivan Prosvetov denied a penalty shot to keep the Wild off the scoreboard for the remainder of the period. Iowa added one last score near the eight-minute mark of the third period, to put the game away at 5-0. Tucson dropped the gloves with Iowa four times throughout the contest, with Ben McCartney, JJ Moser, Mike Carcone, and Boko Imama all getting involved.

The Roadrunners will be back at the Wells Fargo Sunday at 12:00 p.m. MST for a rematch with the Iowa Wild. Coverage begins at 11:45 on Fox Sports 1450AM with Roadrunners Warm-Up hosted by Jimmy Peebles. Then, “Voice of the Roadrunners” Adrian Denny will have all the action live from Des Moines.

“We’re not going to win every game, but we’re definitely going to try to be tough to play against every game.”

Roadrunners forward Boko Imama on Tucson maintaining its status as a tough team to play against despite the 5-0 loss to the Iowa Wild Friday night.

PREVENTING A PENALTY SHOT – Tucson Roadrunners starting goaltender Ivan Prosvetov was tasked with denying an Iowa Wild penalty-shot during the second period of Friday night’s contest in Des Moines. Prosvetov denied Connor Dewar of his fourth goal of the year and kept Iowa’s lead at 4-0 for the remainder of the middle period.

Watch some of the action from Friday’s Tucson Roadrunners game, including a fight by rookie defender JJ Moser, and some slick saves by Ivan Prosvetov.

Tucson Roadrunners Forward Travis Barron battles for the puck in the Roadrunners zone, as goaltender Ivan Prosvetov looks on. Barron has appeared in all 11 games so far this season with the Roadrunners, after spending the last three with the Colorado Eagles.