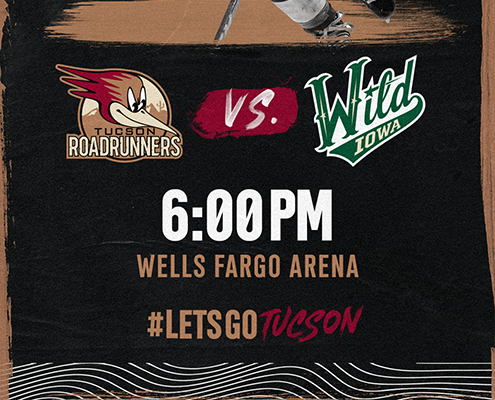 The Tucson Roadrunners head east for the first time this season to take on the Iowa Wild at the Wells Fargo Arena in Des Moines. The Roadrunners are playing the Wild for the first time in nearly two years, and Iowa is one of three AHL Central Division teams that Tucson will play this season. The Wild enter the series on a three-game win streak, after playing host to the Milwaukee Admirals at home last weekend.

Three Things
1) The Roadrunners are facing the Wild for the first time since December of 2019 this weekend when they travel to Des Moines. Tucson has won 11 of their 12 total meetings with the Iowa Wild, dating back to the 2017-2018 Regular Season. Tucson’s only loss to the Wild came over two and a half years ago, on March 20, 2019. Iowa comes into the weekend with a 4-0-1 record at home this season, with a pair of wins over both Milwaukee and Rockford, and a 6-5 overtime loss to Grand Rapids.

2) The Roadrunners enter the weekend having split a two-game series at home with the Ontario Reign, handing the Reign their first regulation loss of the season in the process. Tucson’s weekend performance was headlined by rookies Matias Maccelli and JJ Moser. Maccelli led the Roadrunners to an 8-4 victory last Friday, tallying five points and his first career hat trick in the win. He enters the weekend with Iowa on a three-game active point streak. Moser recorded five points (2g 3a) over the two-game series with the Reign, including his first two multi-point performances of his career. Moser carries a two-game point streak into the weekend.

3) Following the Roadrunners weekend which included an 8-4 victory and a total of five power-play goals, the Arizona Coyotes have recalled several members of Tucson’s opening night roster. Forwards Jan Jenik, Hudson Fasching, and Ben McCartney took the trip to St. Louis earlier this week to help the rest of the Coyotes take down the Blues 3-2. Ben McCartney has since been returned to the Roadrunners, and forwards Lewis Zerter-Gossage and Avery Peterson have been signed to PTOs from the ECHL. Both 26-years-old, Zerter-Gossage played for four seasons at Harvard University and has previously spent time in the AHL with the Hartford Wolf Pack, while Peterson played five games with the Milwaukee Admirals earlier this season and appeared in 71 games with the Rapid City Rush last season. Additionally, forward Liam Kirk had successful knee surgery and will not return this season.

What’s The Word?
Tucson Roadrunners Head Coach Jay Varady on traveling to Iowa after playing in Tucson, Stockton, and Las Vegas so far this season:

“We have to pack a little different, it’s a little cooler in Iowa than it is here right now. It will be good to get into some hockey weather and get our game back together.”

Number to Know
6 – The number of Roadrunners players from the 2020-2021 season in the Arizona Coyotes roster against the St. Louis Blues Tuesday night. Arizona picked up their second win of the season against the Blues by a score of 3-2, backed by a two-goal night by Barrett Hayton and a power-play score by Kyle Capobianco. Also in the lineup for the Coyotes were forwards Jan Jenik and Hudson Fasching, and defensemen Dysin Mayo and Cam Dineen.

We’re Doing It Live
Tonight’s game will be broadcast live on AHLtv, as well as on the radio on Fox Sports 1450AM, or on the iHeartRadio app. Coverage begins at 5:45 p.m. MST with Roadrunners Warm-Up, as Jimmy Peebles gets you ready for the game before “Voice of the Roadrunners” Adrian Denny has the call at 6:00 p.m. live from the Wells Fargo Arena in Des Moines.