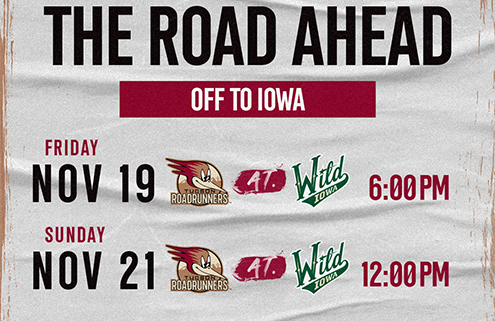 Tucson Roadrunners Road Ahead: Off To Iowa

Kachinas For A Cause

As part of Military Appreciation Night Saturday night at the TCC, the Roadrunners raised over $30,000 in their postgame Kachina Jersey auction with all proceeds going to Vet Tix. Vet Tix enriches the lives of our Military and Veterans by providing reintegration opportunities and family bonding experiences by providing free tickets to socially interactive events. A season high crowd of 5,339 was in attendance for the special evening.

The Roadrunners fan-favorite Kachina jerseys, which debuted in 2019, will be back at the Tucson Arena for a pair of games November 26 and 27, when the Roadrunners host the Abbotsford Canucks for the first time in franchise history. The weekend will be full of festivities, with a cowbell giveaway to the first 1,000 fans Friday night. Fans can purchase a discounted ticket which includes a free Kachina hat for either game by clicking HERE.

Weekend With The Reign

The Roadrunners split the pair of games with the Ontario Reign last weekend, with 21 total goals scored between the two teams. Tucson handed Ontario their first regulation loss of the season with an 8-4 victory Friday night. That game was headlined by a five-point performance (3g 2a) by rookie Matias Maccelli, along with three straight power-play goals scored in the third period. The Reign came back with a vengeance the following night, defeating the Roadrunners by a score of 6-3. The Roadrunners and Reign will face-off six more times this season, with the next meeting scheduled for Saturday, December 18.

Call To The Coyotes

Arizona Coyotes General Manager Bill Armstrong announced today that the Coyotes have recalled forwards Hudson Fasching, Jan Jenik and Ben McCartney from the Tucson Roadrunners. Fasching, 26, has played 10 games for the Roadrunners and recorded 4-6-10 to share the team scoring lead. The 6-foot-3, 204-pound forward has accumulated 1-2-3 and eight penalty minutes (PIM) in 27 career NHL games and 59-62-121 and 83 PIM in 239 career AHL games. Acquired via trade on June 14, 2018, Fasching has appeared in five games for the Coyotes all coming in the 2020-21 season. Jenik, 21, began the year with Tucson and has posted 4-3-7 in 10 games to rank tied for second on the team in goals and third in points. The Nymburk, Czech Republic native played in two games for the Coyotes last season and scored a goal in each of them, becoming the second player in franchise history to score a goal in each of his first two games (Christian Fischer). Jenik was drafted in the third round (65th overall) of the 2018 NHL Draft. McCartney, 20, was recalled by the Coyotes on Nov. 4 and played in two games on Nov. 5-6. The 20-year-old forward has registered 5-1-6, a +2 rating with two PIM in six games with the Roadrunners this season and leads the team in goals upon his recall. The 6-foot, 183-pound native of Macdonald, MB registered 61-90-151 and 238 PIM in 205 career games with the Brandon Wheat Kings (WHL) over five seasons. Fasching and McCartney are two of three Roadrunners to record a hat trick this season.

A Heaping Of Hat Tricks

Another weekend at the Tucson Arena meant another hat trick recorded by the Roadrunners. This time it was rookie forward Matias Macceli, scoring his first three career AHL goals en route to a five-point performance Friday night against Ontario. The five points ties a franchise record for points in a game, and Maccelli was named the first star of the game in the team’s 8-4 win over the Reign.

Exiting the weekend series with Ontario, the Roadrunners had four players come away on point streaks of two games or more. Two of those players, Hudson Fasching and Jan Jenik, have been recalled by the Arizona Coyotes, leaving rookies Matias Maccelli and JJ Moser as the two active skaters with a point streak heading into the pair of games with Iowa this weekend. Maccelli has recorded a point in each of the Roadrunners last three games, including a record-tying five points on Friday. Moser is currently on a two-game point streak, after tallying a two goals and three assists over the two games against Ontario.

Roadrunners rookies Ben McCartney and Matias Maccelli have both scored their first career hat tricks with Tucson this season, becoming the first and third-fastest players in Roadrunners history to score their first hat trick at five and nine career games, respectively. In between them at seven games is forward Matteo Gennaro. Like Maccelli, Gennaro recorded his first hat trick against the Ontario Reign on October 26, 2018, in a contest where the Roadrunners put up eight goals.