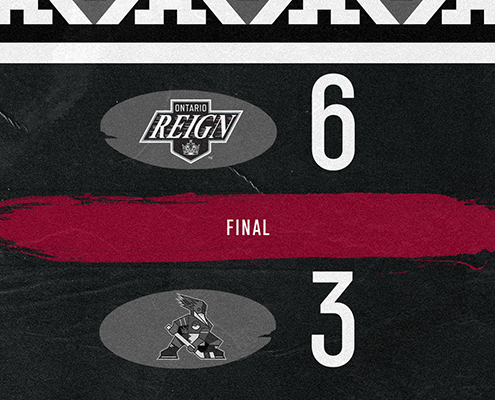 Tucson, Arizona – The Tucson Roadrunners and Ontario Reign faced off in a heated matchup Saturday night at the Tucson Arena. Ontario was looking to avoid back-to-back losses, after Tucson handed the Reign their first regulation loss of the season Friday night. Ontario came away with a 6-3 win, splitting the series with the Roadrunners at one win apiece.

Both teams came out of the gate hungry for the first goal, and the Reign got on the board with a five-on-three power-play goal, giving Ontario a 1-0 lead with five minutes gone by in the first period. Ontario added another a few minutes later with a one-timer, giving the Reign their first two-goal lead of the weekend. Tucson cut the deficit to one with a power-play goal of their own by Ben McCartney for his team-leading fifth goal of the season. The Roadrunners had another power-play that carried over into the second period but couldn’t get things going in time on the opportunity. Ontario once again extended their lead to two goals with just over a minute gone by in the second period, making the score 3-1 off forward Samuel Fagemo’s second goal of the night. Ontario went back on the power-play, and defender Sean Durzi once again scored for the Reign with his second power-play goal of the night, pushing Ontario’s lead to 4-1. Fagemo completed the hat trick ten and a half minutes after his second goal, off a costly turnover in the Roadrunners zone, giving the Reign a 5-1 lead with eight and a half to go in the middle period. The Tucson Arena has now had a hat trick in four of the six games played there so far this season, but Saturday marked the first one recorded by the visiting team. The Roadrunners got one back late in the period, as JJ Moser buried the puck for his second goal of the weekend. Ontario still led by three as the teams entered the final 20 minutes of hockey. Tucson had a pair of power-play opportunities early in the third period, but couldn’t capitalize, keeping the deficit at three goals. It was then Ontario’s turn for a pair of power-plays, but they couldn’t get any offense going either, and the score stayed put at 5-2 in Ontario’s favor. The teams kept battling, but an empty-net score by the Reign put this one away for Ontario, splitting the series with one win apiece. The last few minutes of the night wasn’t without some pushing and shoving and all that fun stuff, but that’s just been the tone of this weekend. Tucson had one last shot on the five-on-three to add some goals, and Jan Jenik took advantage of it, getting his fourth goal of the season. The final score from Tucson was 6-3, with the Reign getting the win.

The Roadrunners will head out on the road to face the Iowa Wild with a pair of games Friday and Saturday. Friday’s game will face-off at 6:00 p.m. MST. Coverage begins at 5:45 on Fox Sports 1450AM with Roadrunners Warm-Up hosted by Jimmy Peebles. Then, “Voice of the Roadrunners” Adrian Denny will have all the action live from Des Moines.

“I don’t consider myself a goal-scorer, but I’m a shooter more than a passer. I think there are a lot of guys who are looking for giving that perfect last pass, but I’d rather take the shot.”

Tucson Roadrunners Defender JJ Moser on his style of play after scoring his third goal of the season Saturday night against Ontario.

LEAVING WITH A STREAK – Four members of the Tucson Roadrunners will enter next weekend’s series with the Iowa Wild on a point streak of two games or more. Rookie Matias Maccelli leads the way with a three-game point streak, followed by Hudson Fasching, Jan Jenik, and JJ Moser with a point in each of the two games against the Ontario Reign.

Watch Tucson Roadrunners forward Ben McCartney cash in on the power-play to give the Roadrunners their first goal of the night. The goal marked McCartney’s first since returning from a pair of games in the NHL with the Arizona Coyotes and put McCartney in the team lead for goals scored.

As part of Military Appreciation Night, the Roadrunners auctioned off the game-worn Military Kachina jerseys, with proceeds going to Vet Tix, a non-profit that supplies tickets to veterans and military families, so they can attend live entertainment and sporting events free of cost.

Tucson Roadrunners Road Ahead: Off To Iowa
Scroll to top