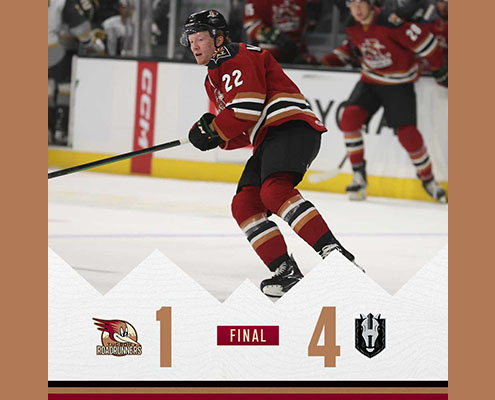 Henderson, Nevada – The Tucson Roadrunners wrapped up their three-game road trip Wednesday night with a 4-1 loss to the Henderson Silver Knights. The Silver Knights took an early 1-0 lead in the first period and added to their advantage with a three-goal second period for their third-straight win on home ice. Forward J.S. Dea found the back of the net for Tucson with his 14th goal of the season and fifth while on the man-advantage. The Roadrunners will return home to open a six-game home stand at the Tucson Arena Friday night with the first of two contests against the Bakersfield Condors.

Roadrunners forward J.S. Dea lit the lamp with 2:38 gone by in Wednesday’s third period for his 14th tally of the season. The power-play strike broke a three-way tie between Dea, Laurent Dauphin and Adam Cracknell for second place on the team in goals behind Mike Carcone. The 28-year-old moved into a tie with Dauphin for second on the team in total scoring with 28 points (14g 14a) in 37 outings this season. Additionally, Dea is one of four Roadrunners skaters to have appeared in all 37 contests for Tucson this season along with Milos Kelemen, Nathan Smith and Vlad Kolyachonok.

CARCONE KEEPS IT ALIVE – Following a change to the original scoring, Tucson forward Mike Carcone set a new Roadrunners franchise record for the longest scoring streak in team history on Wednesday, as his assist on J.S. Dea’s third-period goal marked the 26-year-old’s tenth consecutive game with a point. Carcone tallied the assist while on the man-advantage for his league-leading 26th power-play point and 51st total point (20g 31a) on the season, as he moved the puck to defenseman Cam Dineen who sent it to Dea for the score. During his active ten-game streak, Carcone has amassed nine goals and 11 assists for 20 total points since the streak started on December 17 against San Diego.

Tucson defenseman Cam Dineen tallied an assist on J.S. Dea’s power-play strike in the third period of Wednesday’s matchup against the Henderson Silver Knights to move into a tie for second place in the AHL in power-play assists. Dineen is even with Abbotsford Canucks blue-liner Christian Wolanin at 17 and trails Ontario Reign forward T.J. Tynan by one for the league lead. Along with Dineen, each of the top-six skaters in the American Hockey League in power-play assists reside in the Pacific Division, including Roadrunners forward Mike Carcone in fourth place with 15.

“I’ve been playing hard the last couple of games trying to get us going offensively, so it was nice to get rewarded for the effort.”

Roadrunners forward J.S. Dea on finding the back of the net in the third period of Wednesday’s clash with the Henderson Silver Knights for his 14th goal of the season. Dea moved into sole possession for second place on the team in goals with the power-play score.

The Silver Knights opened the scoring on their home ice with a goal 2:37 into the contest to take an early 1-0 lead over Tucson. The Roadrunners were locked in after the quick strike by Henderson, as they killed off the only opposing power-play of the period and outshot the Silver Knights ten to four overall in the opening frame. Henderson’s early goal was the only scoring of the first 20 minutes, as Tucson trailed 1-0 entering the middle frame. The Silver Knights started the second period with another early goal, scored 4:45 into the frame to extend their advantage to 2-0. Henderson found the back of the net twice in the final 5:50 of the period, including a goal with 17 seconds remaining, to extend their advantage to 4-0 with 20 minutes still to play. The Roadrunners got on the board early in the third period with a power-play goal 2:38 into the frame, scored by forward J.S. Dea for his 14th time lighting the lamp this season. With the score, Dea took sole possession of second place on the Roadrunners for total goals, trailing only the AHL’s leading scorer in Mike Carcone. Cam Dineen and Mike Carcone tallied assists on the score, as Dineen moved into a tie for second place in the AHL in power-play assists with 17 and Carcone set a new Tucson franchise record by notching a point in his tenth consecutive outing. With the deficit cut to 4-1 and 3:11 still to play, the Roadrunners pulled netminder Ivan Prosvetov in favor of an extra attacker. Tucson kept the Silver Knights from scoring on the empty net for 2:43, but Prosvetov returned between the pipes for the final 28 seconds, as Henderson came away with a 4-1 victory.