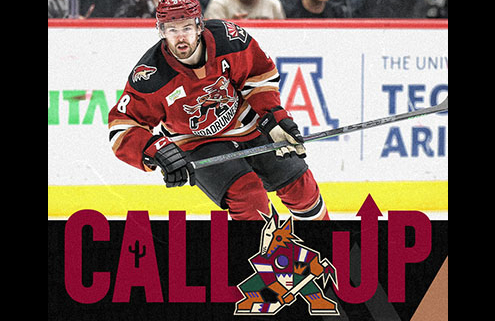 Tempe, Arizona – The Arizona Coyotes and General Manager Bill Armstrong announced Thursday that forward Mike Carcone had been recalled from the Tucson Roadrunners. The move marks Carcone’s second NHL call-up of the season, with the first coming on December 27.

In his first stint this season with the Coyotes, the 26-year-old appeared in six games and scored two goals as a plus-three. Carcone returns to the NHL with eight points (6g 2a) in 27 previous appearances, all with the Coyotes. He made his National Hockey League debut on December 28, 2021, on the road against the San Jose Sharks

Carcone currently leads the American Hockey League in scoring with 20 goals, 31 assists and 51 total points in 32 outings for Tucson. With an assist in their latest contest on Wednesday against the Henderson Silver Knights, Mike set a new Roadrunners franchise record for the longest scoring streak at ten consecutive games. On January 11, he was named as Tucson’s representative at the 2023 AHL All-Star Classic in Laval. The Coyotes are set to take the ice at Mullett Arena Thursday night against the Washington Capitals, while the Roadrunners open a six-game home stand at the Tucson Arena on Friday with the Bakersfield Condors.

1-On-1 With Travis Barron
Scroll to top