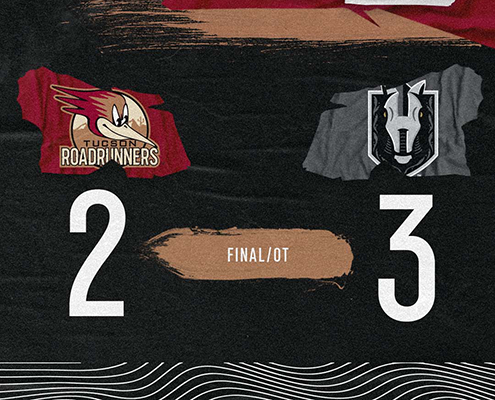 Las Vegas, Nevada – The Tucson Roadrunners wrapped up their two-game series with the Henderson Silver Knights Saturday night at the Orleans Arena in Las Vegas. Tucson once again faced a 2-0 deficit in the first period but were able to tie the game up late in the second period, eventually forcing overtime. Henderson came away with the overtime victory, after scoring in the final minute of the extra period on a four-on-three advantage. Ivan Prosvetov started in net again for the Roadrunners and recorded 21 saves.

The Roadrunners came out strong in the first period, recording the first six shots on goal and drawing the first two power-plays to open the contest. Henderson got on the board during their first power-play of the night and added an even-strength goal 43 seconds later to grab a 2-0 lead 10:07 into the opening frame. The Roadrunners answered back with a goal of their own to cut the deficit to 2-1, when defenseman Ty Emberson buried the puck for his first goal of the season with less than three minutes to go in the period. The final few minutes after the Emberson goal were filled with penalties, producing a five-on-four advantage for Tucson, then an even four-on-four situation, and finally a four-on-three situation, once again for the Roadrunners. The special teams situations carried into the second period, but both teams were kept scoreless until the final 2:15 of the middle frame, when Mike Carcone deflected the puck into the back of the net for his first goal of the season, tying the game up at two. The Carcone equalizer was the last goal scored in regulation, and the two teams headed to a three-on-three overtime to determine the winner. The first four minutes of overtime were a back-and-forth exchange, before Tucson was called for a delay of game penalty, sending Henderson on a four-on-three advantage. The Silver Knights pounced on the opportunity, scoring the game-winning goal in the final minute of overtime to secure a 3-2 win over the Roadrunners.

The Roadrunners will be back home for a pair of games with the Ontario Reign Friday and Saturday, with both games starting at 7:00 p.m. MST. Coverage for Friday’s series opener begins at 6:45 on Fox Sports 1450AM with Roadrunners Warm-Up hosted by Jimmy Peebles. Then, “Voice of the Roadrunners” Adrian Denny will have all the action live from the Tucson Arena.

“We were working our tails off tonight, and unfortunately games like that happen. Guys were bleeding, guys were fighting, guys were finishing hits, making plays, and sometimes it just doesn’t go in for you and that’s what happened tonight.”

Tucson Roadrunners forward Mike Carcone on the team’s strong effort and performance despite falling in overtime Saturday night against the Henderson Silver Knights.

A PAIR OF FIRSTS – Both goals scored by the Roadrunners Saturday were the first of the season for the players that recorded them. Defenseman Ty Emberson and forward Mike Carcone, both in their second seasons with the Roadrunners, scored in the final three minutes of the first and second periods, respectively. Carcone had the equalizer for the Roadrunners that eventually sent the game to overtime.

Watch Tucson Roadrunners forward Mike Carcone deflect a shot from Matias Maccelli for his first goal of the season, tying Saturday’s matchup at two against the Henderson Silver Knights. The goal came late in the second period, and was the last goal scored until the overtime game-winner.

Tucson Roadrunners defender Ty Emberson celebrates with teammates after scoring his first goal of the season Saturday night against the Henderson Silver Knights. The 21-year-old made his professional debut late last season with the Roadrunners, and has appeared in all eight games this season with Tucson.