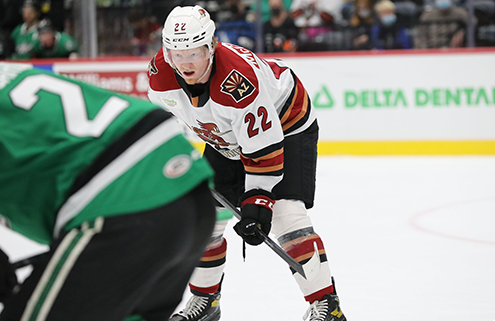 McCartney was recalled by the Coyotes on Nov. 4 and made his NHL debut on Nov. 5 at Anaheim. The 20-year-old forward has registered 4-1-5 and is +2 with two penalty minutes (PIM) in four games with the Roadrunners this season and returns tied for the team lead in goals.

Soderstrom has played in nine games with the Coyotes this season and has totaled 1-1-2 in 13 career games with Arizona. In 32 games with Tucson last season, Soderstrom had recorded 2-8-10 and 8 PIM. He was drafted by the Coyotes in the first round (11th overall) in the 2019 NHL Entry Draft.

The 24-year-old Capobianco missed the first 12 games of the season with a lower-body injury. He has played in 14 career games with the Coyotes, recording one goal and four PIM.

The 6-foot-1, 196-pound native of Mississauga, Ont. has recorded 21-91-112 and 156 PIM in 155 career games with the Tucson Roadrunners across the team’s first five seasons in Southern Arizona. He was originally drafted by the Coyotes in the third round (63rd overall) in the 2015 NHL Entry Draft.