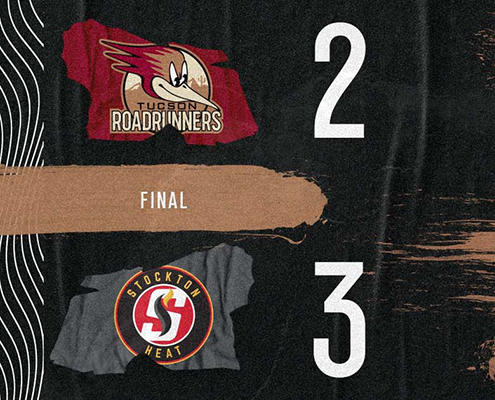 Stockton, California – The Tucson Roadrunners lost a back-and-forth battle with the Stockton Heat Saturday night in California, by a final score of 3-2. Hudson Fasching and Cam Dineen, both in their fourth seasons with the club, scored the pair of goals for the Roadrunners. Goaltender Josef Korenar made his debut for Tucson, making stopping 22 shots in the loss.

Both teams traded offensive chances throughout the first period, with each squad rattling off five-straight shots back-to-back. Stockton was the first to get on the board, with a power-play goal with 5:49 to go in the opening period, on their first man advantage of the night. Tucson answered back quickly with a power-play goal of their own, scored by #24 Hudson Fasching. Through the first 82 minutes of action this season between the Roadrunners and Heat, not a single five-on-five goal had been scored. That would change in the first two minutes of the second period, as Stockton found the back of the net twice, to take a 3-1 lead. The Roadrunners ended the period with thirteen consecutive shots on goal, but Stockton netminder Dustin Wolf turned all thirteen aside, to keep the Heat lead at two goals. Tucson battled back and pulled to within one goal in the third period, when defenseman Cam Dineen slipped the puck past Wolf five and a half minutes into the final frame. Tucson controlled the pace of the game the rest of the way, but came up short at the end of regulation, falling to the Heat 3-2 for their first loss of the season, splitting the two-game opening series.

The Roadrunners return home for two games with the Texas Stars at the Tucson Convention Center, with the 2021-2022 Home Opener Saturday night at 7:00 p.m. Coverage starts at 6:45 on Fox Sports 1450AM, with Roadrunners Warm-Up hosted by Jimmy Peebles. Then, “Voice of the Roadrunners” Adrian Denny will have all the action live from Southern Arizona.

“I think we played a pretty solid game today actually. We kind of fell asleep at the beginning of the second period there, and they came out flying. But I think we responded well and played a good rest of the game.”

Tucson Roadrunners defenseman Cam Dineen on falling behind 3-1 early in the second period and how the team responded in Saturday night’s game against Stockton.

SPECIAL TEAMS SIGNIFICANCE – The Tucson Roadrunners and Stockton Heat combined for a total of five penalties and three power-play opportunities, two for the Heat and one for the Roadrunners. Both teams were able to capitalize on the man advantage in the first period, giving the Roadrunners a 100-percent power-play percentage in Saturday’s matchup with the Heat. Hudson Fasching had the special-teams goal for Tucson, his first of the year.

Watch Tucson Roadrunners forward Hudson Fasching bury the power-play goal late in the first period to tie Saturday night’s contest against the Stockton Heat at one. Fasching is entering his fourth season in the Arizona Coyotes organization and is looking to return as a dominant member of the Roadrunners lineup, after spending the majority of last season on the Arizona Coyotes taxi squad.

Tucson Roadrunners forward Michael Carcone carries the puck into the offensive zone in Saturday night’s game with the Stockton Heat. Carcone signed a two-year deal with the Coyotes this past offseason to remain in the desert, after leading the Roadrunners in goals last season. Carcone recorded two assists in the 3-2 loss in Stockton.