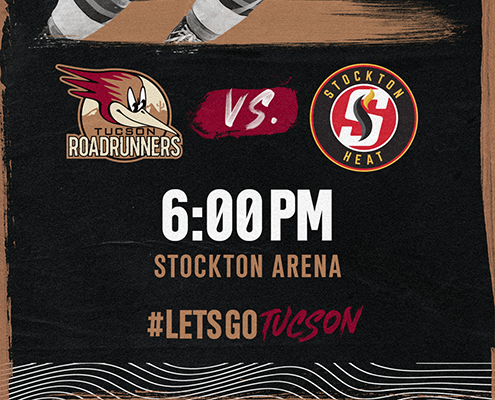 The Tucson Roadrunners wrap up their opening weekend series with the Stockton Heat Saturday night at 6:00 p.m. at Stockton Arena in California. The Roadrunners came away with a 1-0 overtime win in their season opener, as newcomer Vladislav Kolyachonok rifled the game-winner past Stockton netminder Dustin Wolf 1:56 into the overtime period, and Tucson goaltender Ivan Prosvetov earned a shutout win in his first start of the season.

2) Roadrunners starting goaltender Ivan Prosvetov was lights out in Friday night’s 1-0 shutout win. Prosvetov turned away all 29 shots brought on by the Heat, including several highlight-reel quality saves on breakaways and penalty-kills to keep the score tied at zero to the end of regulation. Prosvetov didn’t face a shot during the three-on-three overtime period, as the Roadrunners only needed one shot to win the game and earn him his first shutout win of the season in his first start.

3) After dominating the shots on goal and power-play chance categories in the preseason, the Roadrunners continued the trend into their regular season opener against the Stockton Heat. Tucson outshot the Heat 35-29, as well as outshooting Stockton in the first, second, and overtime periods individually. In addition, the Roadrunners had five power-play opportunities compared the Stockton’s two, with Tucson drawing three straight man advantages in the first period.

What’s The Word?
Tucson Roadrunners goaltender Ivan Prosvetov on opening the regular season with an overtime shutout win on the road against the Stockton Heat:

“It was an exciting win for us for sure… Unfortunately, this one wasn’t at home, it would’ve been a nice win and a great atmosphere at the TCC. We enjoyed this one, but we’re going to get ready for the next one.

Number to Know
7 – The number of players that made their Roadrunners debut in Friday night’s season opener against the Stockton Heat. Among them are overtime hero Vladislav Kolyachonok, as well as rookies Matias Maccelli, J.J. Moser, Tyson Empey, and Liam Kirk. Cole Hults and Travis Barron, both with prior experience in the AHL Pacific Division, round out the list of new Tucson Roadrunners players in Friday’s lineup.

We’re Doing It Live
Saturday’s game will be broadcast live on AHLtv, as part of the AHL’s free preview weekend, as well as on the radio on Fox Sports 1450AM, or on the iHeartRadio app. Coverage begins at 5:45 p.m. MST with Roadrunners Warm-Up, as Jimmy Peebles gets you ready for the game before “Voice of the Roadrunners” Adrian Denny has the call at 6:00 p.m. live from Stockton.