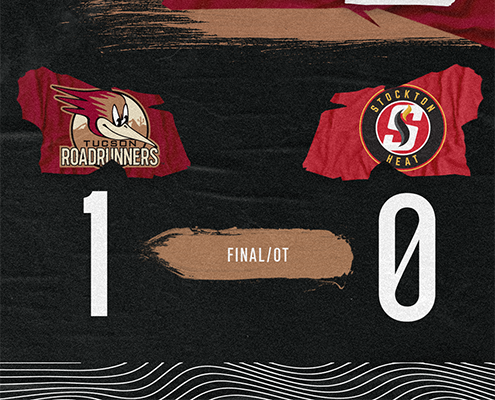 Stockton, California – The Tucson Roadrunners opened the 2021-2022 AHL Regular Season Friday night with a 1-0 overtime victory against the Stockton Heat. Both teams were held scoreless through the first 61:56 of action, before Vladislav Kolyachonok buried the game-winner in overtime for Tucson. The Roadrunners played a physical game, with a handful of heavy hits, blocked shots, and a fight between Tyson Empey and Alex Gallant. Goaltender Ivan Prosvetov picked up a shutout in his first start of the season, turning away all 29 shots faced.

The Roadrunners came out of the gate strong, applying pressure on the Heat in their zone and drawing three straight power-plays to open the contest. Returning forward Michael Carcone landed a huge hit on a Stockton skater to set the tone early on. After three straight man advantages, the roles were reversed as Tucson went on back-to-back penalty-kills to end the first period and open the second. Roadrunners defenseman Tyson Empey dropped the gloves with Stockton’s Alex Gallant less than five minutes into the middle frame, further enforcing the physicality of the game. The teams traded scoring chances, with starting goaltenders Ivan Prosvetov and Dustin Wolf turning away any shots that came their way. Jan Jenik, back for his second season with the Roadrunners, had some prime opportunities on the breakaway, but was either denied by Wolf, or deflected off the iron. The teams were still locked in a zero-zero tie after the full sixty minutes of time, becoming the first game in the young AHL season to head to overtime. Less than two minutes into the three-on-three extra period, Roadrunners defender Vladislav Kolyachonok took a pass from Matias Maccelli near center ice and began a two-on-one chance alongside Blake Speers. Kolyachonok rifled the puck past Dustin Wolf for the overtime game-winner, starting Tucson’s season off with a 1-0 record.

The Roadrunners wrap up their opening weekend series with the Stockton Heat Saturday night at 6:00 p.m., with coverage starting at 5:45 on Fox Sports 1450AM, with Roadrunners Warm-Up hosted by Jimmy Peebles. Then, “Voice of the Roadrunners” Adrian Denny will have all the action live from Stockton Arena.

“I’m very excited about the win, it’s a good start to the season. Thanks to Matias [Maccelli] for the good pass. We worked hard this game and deserved to win, and I’m really proud to be part of this team.”

Tucson Roadrunners defenseman Vladislav Kolyachonok on netting the overtime game-winner in his Roadrunners debut Friday night against the Stockton Heat.

ONE SHOT, ONE GOAL- The Tucson Roadrunners outshot the Stockton Heat 35 to 29 over the course of Friday night’s matchup, but only needed one shot in the three-on-three overtime period to come away with a 1-0 win. Stockton goaltender Dustin Wolf stopped the first 34 shots he faced, but Vladislav Kolyachonok launched shot number 35 past Wolf to come away with the win for Tucson.

Tucson Roadrunners goaltender Ivan Prosvetov stretches to make a save in Friday’s 1-0 overtime win against the Stockton Heat on the road. Prosvetov made a plethora of highlight-reel worthy saves in the season opener, as he earns a shutout in his first start of the season.