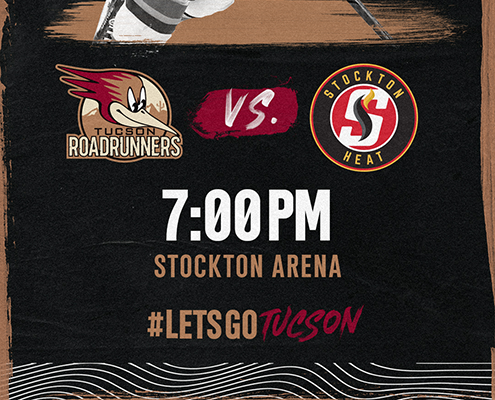 The Tucson Roadrunners open the 2021-2022 AHL Regular Season Friday night on the road against the Stockton Heat. The Roadrunners are looking to build off of their strong preseason, winning each of their final two outings against the Henderson Silver Knights. Friday’s contest is the first meeting between the Roadrunners and Heat since February 2020.

Three Things
1) The Roadrunners finished the preseason with a 2-1 record, with all three games against the Henderson Silver Knights. In their two wins at the Orleans Arena in Las Vegas, the Roadrunners outshot the Silver Knights 76-28 and outscored Henderson seven to three. Tucson drew a total of 15 power-play opportunities in the three games, with Bokondji Imama cashing in on the man advantage in Monday night’s 3-2 victory. The Roadrunners will look to continue this success into the regular season, as they seek to reclaim the title of Pacific Division Champions.

2) The Roadrunners are taking on the Stockton Heat Friday night, for the first time since February 22, 2020. That season, the Pacific Division Champion Roadrunners won the season series with Stockton with a 5-1-0-1 record against the Calgary Flames affiliate, outscoring the Heat 26-23 over their seven meetings. Two of the Roadrunners five wins against the Heat came in overtime, with a third win coming by way of shootout.

3) While the Roadrunners are taking on the Heat to open the regular season this weekend, the rest of the AHL Pacific Division will be active as well. Starting at the same time as the Roadrunners season opener Friday, the Colorado Eagles and Henderson Silver Knights will open their seasons at the Orleans Arena in Las Vegas. The next night, the San Diego Gulls and Ontario Reign will kick off their campaigns in Ontario, and the Abbotsford Canucks will play their-first ever game against the Condors in Bakersfield. The San Jose Barracuda will be last team in the Division to get their season underway, as they will also take on the Condors on the road.

What’s The Word?
Tucson Roadrunners forward Jan Jenik about getting back into game action with his Roadrunners teammates, and opening the regular season this weekend in Stockton:

“I’m definitely excited to get back into it, get two wins and get back home. Obviously, we have a great team, a great group of guys and I’m excited to be here. We work hard and work as a team. Being with the boys, that’s the most fun about hockey.”

Number to Know
8 – The number of different players to score a goal during the Roadrunners three-game preseason slate. Five of the eight players are returning to the Tucson roster from last season; Jan Jenik, Hudson Fasching, Cam Dineen, Cam Crotty, and Cameron Hebig. The remaining three goals were scored by Matias Maccelli, Bokondji Imama, and Quinn Wichers.

We’re Doing It Live
Friday’s game will be broadcast live on AHLtv, as part of the AHL’s free preview weekend, as well as on the radio on Fox Sports 1450AM, or on the iHeartRadio app. Coverage begins at 6:45 p.m. MST with Roadrunners Warm-Up, as Jimmy Peebles gets you ready for the game before “Voice of the Roadrunners” Adrian Denny has the call at 7:00 p.m. live from Stockton.