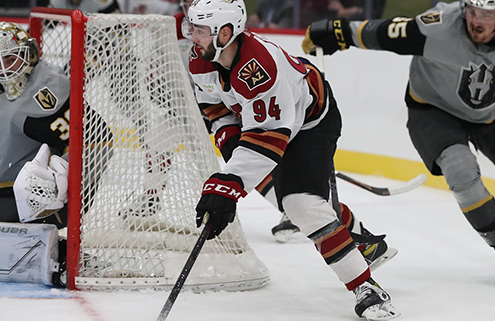 The Roadrunners finished the preseason with a 2-1 record against the Henderson Silver Knights, with both wins coming on the road at the Orleans Arena in Las Vegas, Nevada. The Roadrunners outshot the Silver Knights 76-28 over the final two games and drew a total of 12 power-play opportunities. Eight different players scored a goal during the three-game preseason slate, and rookie forward Matias Maccelli led the way with three points (1g 2a).

Monday afternoon, the Arizona Coyotes announced the following players have been assigned to the Tucson Roadrunners for the start of the AHL regular season:

Barrett Hayton appeared in the Roadrunners preseason finale Monday night, after being assigned to Tucson earlier in the day. Hayton recorded an assist and four shots on goal in the 3-2 win.

The Roadrunners will open the 2021-2022 AHL Regular Season in the state of California, with a pair of games with the Stockton Heat. The Heat are returning to the Pacific Division, after playing in the AHL Canadian Division last season. The Roadrunners have not faced the Stockton Heat since February 2020, when they concluded their season series against the Heat with an impressive 5-1-0-1 head-to-head record.

Along with the return of the Stockton Heat, the AHL Pacific Division will be welcoming the newly formed Abbotsford Canucks, AHL affiliate of the Vancouver Canucks. Tucson will face the Canucks for the first time November 26 and 27 and take their first trip up to Abbotsford December 22 and 23. The Pacific Division now hosts nine teams, the most in the history of the Division.

After the two-game series with the Stockton Heat to open the season, the Roadrunners will head home for back-to-back weekends at the TCC, taking on the Texas Stars and San Diego Gulls for two games apiece. The team’s Opening Weekend will be October 23 and 24 against Texas, with tickets available HERE

Student Rush To The Rink

Snagging tickets to the Roadrunners Home Opener has never been easier for college students, thanks to the new Student Rush Pack. Students can receive a ticket to Saturday, October 23 when the Roadrunners take on the Texas Stars, along with a T-shirt, future discounts on tickets, and an exclusive web seminar with Arizona Coyotes and Tucson Roadrunners executives, all for $20. The Student Rush Pack can be found HERE

Cam You Believe It?

Sunday night’s 4-1 Roadrunners preseason win over the Henderson Silver Knights featured a unique scoring sheet, as the first three Tucson goals were all scored by skaters named Cam. Defenders Cam Crotty and Cam Dineen opened the scoring for the Roadrunners early in the third period, with goals scored a minute and 20 seconds apart. Forward Cameron Hebig joined in on the action later in the period, scoring a goal of his own for his second point of the night. The so-called “Cam Trick” caught the attention of fans on Twitter, as the Roadrunners cruised to their first win of the preseason.

The Tucson Roadrunners Happy Hour is back in full swing, going live every Tuesday from 5pm to 6pm on Fox Sports 1450 AM and the iHeartRadio app. Adrian Denny and Brett Fera will look ahead to the regular season opener, along with a special guest from the Arizona Republic, Jose Romero. In addition to Roadrunners Happy Hour, the Tucson Roadrunners Insider Podcast releases ever Monday, where Adrian Denny and Jimmy Peebles talk most things Roadrunners, as well as the wide world of sports in Southern Arizona. The half-hour podcast can be found on the iHeartRadio app, including a special postgame edition that dropped late Monday night after the preseason finale in Las Vegas.