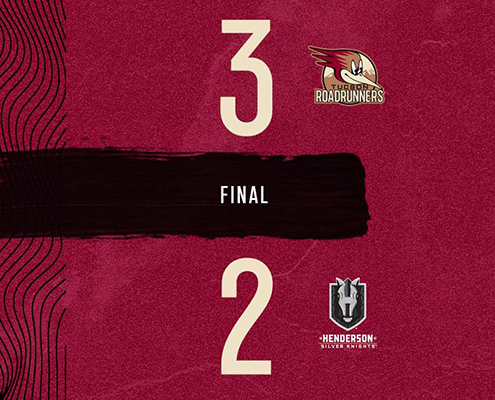 Las Vegas, Nevada – The Tucson Roadrunners concluded the preseason with a 3-1 win over the Henderson Silver Knights, at the Orleans Arena in Las Vegas. Tucson earned nine of the 11 total power-plays in the contest, as well as a repeat of Sunday night’s domination of the shots on goal category, with a 42 to 17 shots advantage to the Silver Knights. Goaltender Josef Korenar made his first start for the Roadrunners Monday night, stopping 15 shots and picking up his first victory in a Roadrunners uniform. The Roadrunners conclude the preseason with a 2-1 record and will head west to open the regular season against the Stockton Heat.

The Roadrunners play in the first period was similar to the game story of Sunday night, with the Roadrunners leading shots on goal the whole way and drawing four power-plays to Henderson’s one chance on the man advantage. The Silver Knights were able to capitalize on their opportunity and came away with a 1-0 lead after the first 20 minutes of play. Henderson held onto that lead for the majority of the second period, but veteran forward Hudson Fasching broke the tie with a four-on-four goal scored with 1:32 to go in the middle frame. The teams entered the final period of the preseason tied at one goal apiece, with both squads looking to win both Monday’s game, and the unofficial three-game preseason series. The Roadrunners wasted no time taking the lead in the third period, as Matias Maccelli broke the tie only 1:40 into the final frame, making the score 2-1 in their favor. The Roadrunners gave themselves some breathing room less than four minutes later, as Bokondji Imama buried the puck on the power-play for his first goal as a Roadrunner, extending their lead to 3-1. A late six-on-five goal by the Silver Knights brought them back to within one, but it was too late as the Roadrunners came away with a 3-2 victory. The Roadrunners finish the preseason with a 2-1 record, winning the final two contests at the Orleans Arena in Las Vegas.

The Roadrunners will stay out on the road, traveling to Stockton to open the season with the Heat Friday night. Coverage for the regular season opener game starts at 6:45 on Fox Sports 1450AM, beginning with Roadrunners Warm-Up hosted by Jimmy Peebles. Then, “Voice of the Roadrunners” Adrian Denny will have the call as the Roadrunners open the 2021-2022 AHL Campaign.

“I think that’s the spot that best fits my game. I’m able to be there physically and screen the goalie and help the guys win the battle, but it’s always good to get one [of your own] in front there.”

Tucson Roadrunners forward Bokondji Imama on netting the game-winning power-play goal up near the crease in Monday night’s 3-2 victory over the Henderson Silver Knights.

MANY MAN ADVANTAGES – The Tucson Roadrunners were gifted nine power-plays in Monday night’s 3-2 win over the Henderson Silver Knights, with Bokondji Imama cashing in on the man advantage early in the third period to extend Tucson’s lead at the time to 3-1. The goal wound up as the game winner and was Imama’s first score in a Roadrunners uniform.

New Tucson Roadrunners forward Liam Kirk rifles a shot in Monday night’s 3-2 preseason victory over the Henderson Silver Knights. The 2018 seventh-round pick appeared in all three preseason games for the Roadrunners and picked up an assist in Sunday’s 4-1 win.

Tucson Roadrunners Road Ahead: And We’re Off!
Scroll to top