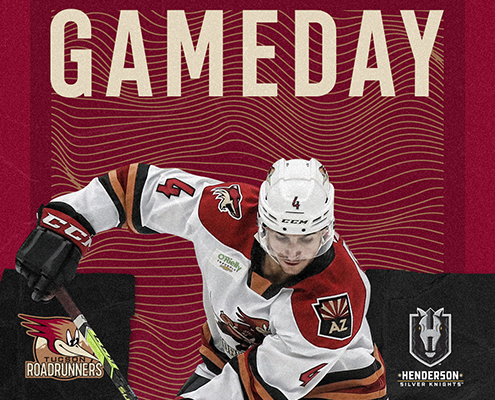 The Tucson Roadrunners wrap up the preseason Monday night with a rubber match against the Henderson Silver Knights. Each team has a win in the opposing team’s arena, after Sunday night’s 4-1 Roadrunners victory at the Orleans Arena in Las Vegas. After Monday’s preseason finale, the Roadrunners will stay on the road as they open the regular season with a pair of games against the Stockton Heat.

Three Things
1) The Roadrunners dominated the shots on goal category in Sunday night’s clash with the Silver Knights, outshooting Henderson by a tally of 32 to 11. Through the first two periods, the Roadrunners had outshot the Silver Knights 18-5, with Ivan Prosvetov stopping everything that came his way until Henderson avoided the shutout with a late goal in the third period. The consistent offensive pressure is part of what led to the team’s 4-1 victory.

2) The first three goals scored by the Roadrunners in Sunday night’s win have one thing in common: they were scored by a player named “Cam.” Defensemen Cam Crotty and Cam Crotty broke the 0-0 tie early in the third period, with goals only 1:20 seconds apart. Forward Cam Hebig joined in on the action later in the period, scoring a goal of his own to push the lead to 3-0, and earning him the first multi-point night of the preseason by a Roadrunner.

3) Returning Roadrunners played a big part in Sunday night’s success against the Silver Knights. All four goals were scored by players from last season’s Roadrunners roster. The previously mentioned trio of Cams scored the first three goals, before Jan Jenik cashed in on the empty next with 1:17 remaining in the third period to put away the game for Tucson. Forward Blake Speers assisted on the Cameron Hebig goal, and goaltender Ivan Prosvetov was solid in net to round out the list of returning Roadrunners appearing in Sunday’s stat sheet.

“Ty’s a good player, he’s a young prospect for the Coyotes coming up. He has a lot of potential and it’s nice being paired up with him. We move the puck well, he plays strong D, and I really like our game together.”

Number to Know
90 – The number of combined penalty minutes in Sunday night’s preseason matchup between the Tucson Roadrunners and Henderson Silver Knights. The first period alone saw 13 penalties assessed, 10 of which coming in the final minute of play. Total infractions were split 11-10 with the Roadrunners picking up the extra penalty.

We’re Doing It Live
Monday’s game can be listened to live on Fox Sports 1450AM, or on the iHeartRadio app. Coverage begins at 6:45 p.m. MST with Roadrunners Warm-Up, as Jimmy Peebles gets you ready for the game before “Voice of the Roadrunners” Adrian Denny has the call at 7:00 p.m. live from Las Vegas.