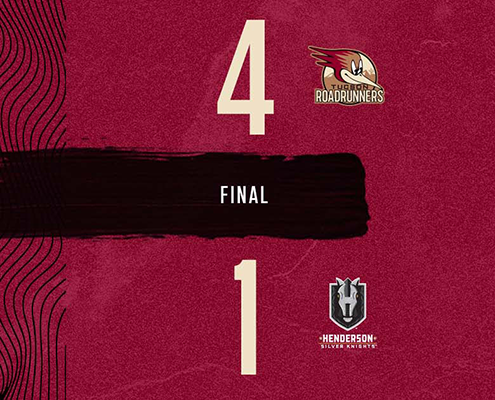 Las Vegas, Nevada – The Tucson Roadrunners looked solid on both sides of the ice Sunday, as Tucson came away with a 4-1 win over the Henderson Silver Knights, at the Orleans Arena in Las Vegas. The Roadrunners dominated the shots on goal category all game but couldn’t break the 0-0 stalemate until the opening minutes of the third period. All three Cam’s on the Roadrunners roster recorded a goal, with defensemen Cam Crotty and Cam Dineen scoring the first two just 1:20 apart. Cameron Hebig added on to the scoring later in the period, and a Jan Jenik empty-net goal rounded out the Roadrunners scoring.

The first period didn’t produce any goals but displayed a clear offensive advantage for the Roadrunners. Tucson recorded seven of the first eight shots, ending the period with total shots in their favor nine to two. The officials had a busy first period as well, as both teams combined for 64 penalty minutes in the first 20 minutes of ice time. As the dust settled and the teams headed to the locker rooms for the first intermission, seven minor penalties and five misconducts had been assessed. The second period was more of the same, with the Roadrunners continuing to dominate the shot category, doubling their total shots on goal to 18. Through the first 40 minutes of action, Roadrunners netminder Ivan Prosvetov had faced a total of five shots. He’d end the night with 10 saves on 11 shots. The Roadrunners broke the tie early in the third period, with two goals a 1:20 apart to take a 2-0 lead. Defensemen Cam Crotty and Cam Dineen netted the goals. Not to be outdone by the other Cams, Cameron Hebig scored his own goal after assisting on Cam Crotty’s earlier tally, pushing the score to 3-0 with seven minutes to go in the contest. The Silver Knights avoided the shutout with a goal of their own with a little over four minutes left in the final frame. An empty-net tally by Jan Jenik with 1:17 to go sealed the win for the Roadrunners. The 4-1 victory evens up Tucson’s preseason record, turning Monday night’s game with the Silver Knights into a preseason rubber match.

The Roadrunners wrap up the preseason with their third exhibition matchup with the Henderson Silver Knights Monday, October 11 at the Orleans Arena in Las Vegas. Coverage for that game starts at 6:45 on Fox Sports 1450AM, where “Voice of the Roadrunners” Adrian Denny will bring you all the action live from Las Vegas one final time, before the team heads west to Stockton to open the regular season.

“It feels good to get a goal, whether it’s preseason or not. There’s still a lot to clean up, a lot to work on. I’m just trying to get better each day and try to find a role on this team and keep working. It’s fun to get out there with the guys, and we’re looking forward to another one [Monday night].”

Tucson Roadrunners defenseman Cam Dineen celebrates his third period goal with his teammates during Sunday night’s 4-1 win over the Henderson Silver Knights. Dineen’s goal wound up as the game-winner and came 1:20 after fellow defensemen Cam Crotty broke the 0-0 tie.