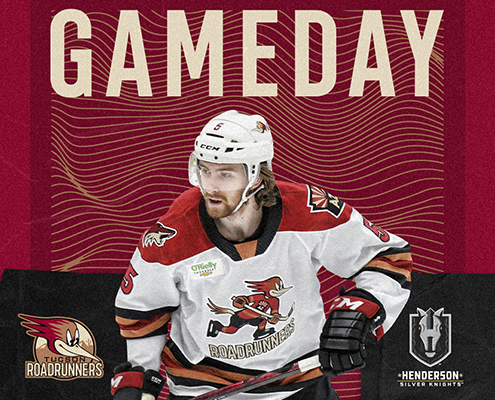 The Tucson Roadrunners head to Las Vegas for a pair of games with the Henderson Silver Knights to wrap up the 2021-2022 AHL Preseason. The Roadrunners will continue to use these games to take a look at young prospects joining the team, while mixing in more of the returning players from last season.

Three Things
1) The Roadrunners will be making their second-ever trip to the state of Nevada for their remaining two preseason games with the Silver Knights. The Roadrunners first trip to the Las Vegas area came in April of last season, with a three-game series with the Silver Knights in their inaugural season. During the series, Michael Carcone took sole possession of the team lead for goals with his eleventh of the season, and Cameron Hebig notched a goal and an assist to conclude a stretch of four points in five games.

2) Three returning Roadrunners brandished the “A” on their jerseys for Wednesday’s preseason opener with the Silver Knights at the Tucson Arena. Defenseman Cam Dineen, and forwards Blake Speers and Hudson Fasching. Dineen and Fasching are each entering their fourth year with the club, while Speers is entering his third. Fasching spent most of last season with the Arizona Coyotes up in Glendale, but appeared in 57 games with the Roadrunners the season prior, finishing second on the team for goals with 19.

3) After back-to-back contests in Las Vegas with the Silver Knights to close out the preseason, the Roadrunners will continue straight to Stockton from Vegas, in preparation for their opening series with the Stockton Heat October 15 and 16. Those opening weekend matchups with the Heat will be the first time the Roadrunners face Stockton since the end of February 2020. Stockton spent last season as a member of the AHL Canadian Division, to remain in close proximity to their parent club, the Calgary Flames.

What’s The Word?
Tucson Roadrunners defenseman Cam Dineen on having the opportunity to step into a leading role this season among the young talent on the Tucson roster:

“It’s an exciting feeling, but at the same time we have to come in and show the younger guys the way and be good leaders. This year especially we have a young team with a lot of prospects… you have to show these guys the right way to play and the right way to treat their bodies on and off the ice. I think it’s a big step for myself and for the older guys here.”

Number to Know
32 – The number of the newest Tucson Roadrunners goaltender, Josef Korenar. Korenar was assigned to the Roadrunners by the Arizona Coyotes Friday afternoon, along with forward Bokondji Imama. The 23-year-old from the Czech Republic is entering his fourth season in the AHL, all from within the AHL Pacific Divison as a member of the San Jose Barracuda before joining the Roadrunners.

We’re Doing It Live
Sunday’s game can be listened to live on Fox Sports 1450AM, or on the iHeartRadio app. Coverage begins at 6:45 p.m. MST with Roadrunners Warm-Up, as Jimmy Peebles gets you ready for the game before “Voice of the Roadrunners” Adrian Denny has the call at 7:00 p.m. live from Las Vegas.