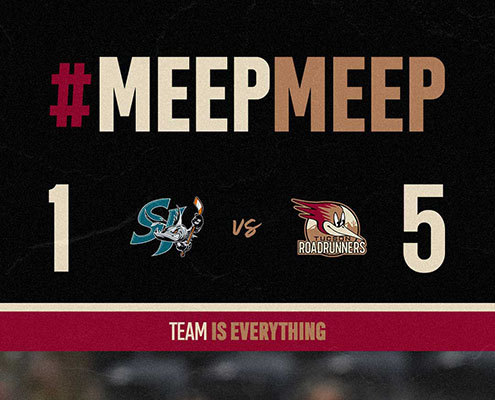 San Jose, California – The Tucson Roadrunners improved to 4-1-0-0 on the year Friday night, as they handed the San Jose Barracuda their second loss of the season by a score of 5-1. The Barracuda took a 1-0 lead into the first intermission, before Tucson answered back with the next five goals to close out the contest. Roadrunners goaltender Ivan Prosvetov stopped 38 of 39 shots faced for his third win through three starts this season, while Mike Carcone, Jean-Sebastien Dea, Cam Dineen, Adam Cracknell, Jan Jenik, and Laurent Dauphin all extended their scoring streaks to three outings or more.

Roadrunners forward Mike Carcone gave the Roadrunners their first lead of the night at 2-1 with 12:06 gone by in the middle period. The goal was Carcone’s second of the season and extended his team lead in points to eight. The third-year Roadrunner extended his point streak to four games with his third multi-point effort in that stretch (1g 1a).

STREAKS ARE THE STORY – The Roadrunners power-play goal in the second period of Friday’s 5-1 win did more than give Tucson a 2-1 lead, it ended San Jose’s streak of 25 consecutive successful penalty-kills to open the season. The Barracuda were the last team in the American Hockey League to surrender an opposing power-play goal, and it was scored by Roadrunners forward Mike Carcone. Carcone was one of six Tucson skaters that extended their point streaks to three games or more, while him and Jean-Sebastien Dea were the only two to record a point in each of their last four appearances.

Roadrunners forward Travis Barron battles for the face-off with San Jose’s Jasper Weatherby. Barron started for Tucson alongside linemates Boko Imama and Hudson Elynuik, as the trio each finished with a plus-minus of plus-one. Starting defensemen Ronald Knot and Vlad Kolyachonok each led the contest at plus-three.

“I really enjoyed being out there with the fellas and getting a big W… We had a good forecheck, Cam (Crotty) dove down and had a nice tip goal. There’s some chemistry between us, he’s my roommate.”

Roadrunners defenseman Devante Stephens on recording an assist on a Cam Crotty goal in Friday’s 5-1 win over the San Jose Barracuda, which marked the 25-year-old’s Roadrunners debut.

Coming off their first loss of the season on Wednesday against the Ontario Reign at home, the Barracuda grabbed the first goal of Friday’s contest with a power-play strike 12:46 into the opening frame. With both nets featuring goaltenders with NHL experience in Ivan Prosvetov and Aaron Dell, San Jose’s goal was the only score of the first period as Tucson trailed 1-0 after 20 minutes. The Roadrunners evened the score at one early in the middle frame, as defenseman Cam Crotty netted his first goal of the season on a deflection 2:38 into the period. Tucson took their first lead of the night nearly ten minutes with a power-play score by Mike Carcone, his second goal of the season and team-leading eighth point on the year. The goal ended San Jose’s streak of successful penalty-kills to start the season at 25, as they were the last team in the AHL to allow an opposing power-play goal. The Roadrunners kept applying pressure late in period to grab the first multi-goal lead of the contest at 3-1, as first-year forward Milos Kelemen scored his second goal of the season unassisted with just 1:34 still to play in the middle frame. Tucson was able to limit San Jose’s shots on goal in the third before adding on a pair of insurance goals to make it a 5-1 lead with 3:37 left in regulation. Adam Cracknell extended his point streak to three games with his second goal of the season, followed by a Boko Imama empty-net score to put the game away for the Roadrunners.