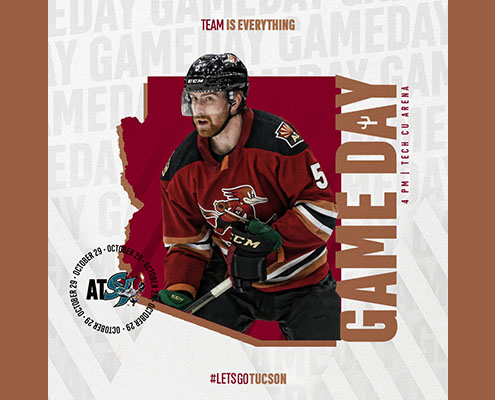 The Roadrunners wrap up their weekend series with the San Jose Barracuda Saturday afternoon at the Tech CU Arena after meeting for the first time this season Friday night. Tucson will be looking for their fourth-straight win after Friday’s 5-1 victory in the series opener, backed by a three-goal second period to erase a 1-0 deficit. The Roadrunners will look to remain ahead of the Barracuda in the AHL’s Pacific Division standings, after jumping the San Jose Sharks AHL affiliate for second place on Friday.

Three Things
1) Tucson took the series opener against San Jose Friday night by a score of 5-1 after falling behind 1-0 in the first period. In each of the last two games where the Roadrunners have allowed a score in the opening frame, they have responded by recording at least the next four goals and coming away with the win. Friday also saw the Roadrunners tally their second period of three goals or more in the first five games of the year, with a three-goal middle frame to the 1-0 deficit. Defenseman Cam Crotty and forward Boko Imama each found the back of the net in Friday’s win, becoming the 11th and 12th Tucson skaters to light the lamp this season through five games.

2) The Roadrunners have scored five goals in each of their last three contests dating back to last Saturday against the Bakersfield Condors. Tucson was 16-4-0-0 last season when scoring four goals or more and improved to 3-0-0-0 this season when scoring at least four after defeating the Barracuda 5-1 in Friday’s series opener. During this stretch, eight of the 15 goals have come in the second period, including four power-play strikes in the middle frame. Tucson’s plus-five goal differential this season is currently the second-best in the AHL’s Pacific Division behind Ontario.

3) Six Roadrunners skaters extended their point streaks to three games or more in Friday’s win, while two more established point streaks of multiple outings. Mike Carcone led the overall scoring with a goal an assist to push his active streak to four games, with eight points (2g 6a) during that span. Also taking a four-game scoring streak into Saturday is Jean-Sebastien Dea with an assist on Carcone’s goal in the series opener. Cam Dineen (1a), Adam Cracknell (1g), Jan Jenik (1a), and Laurent Dauphin (1a) all extended their point streaks to three appearances, while forwards Boko Imama (1g) and Hudson Elynuik (1a) joined in on the action by recording a point in their second consecutive efforts.

“I think when everyone’s flowing and all four lines are flowing, it’s awesome. We’re hard on the forecheck and we’re hard to play against. I think we’re deep and we have to bring it every night and we’ll be effective.”

Forward Cameron Hebig on the depth of the Roadrunners, as 12 different players have scored a goal through five games this year.

Number to Know
38 – The number of saves made by Roadrunners goaltender Ivan Prosvetov in Friday’s series-opening win against the Barracuda. His 38 saves were the most in a game by the 23-year-old since January 9, 2022, and the most in a road victory since May 1, 2021, against San Diego. Prosvetov is now 3-0-0 to start the season for the second time since joining Tucson in 2019 and his save percentage of .947 is fourth in the AHL among qualified goalies.

We’re Doing It Live
Today’s game will be broadcast live on AHLtv, as well as on the radio on FOX Sports 1450AM and the iHeartRadio app. Coverage will start at 3:45 p.m. with Roadrunners Warm-Up hosted by Jimmy Peebles, before “Voice of the Roadrunners” Adrian Denny has all the action from the Tech CU Arena.