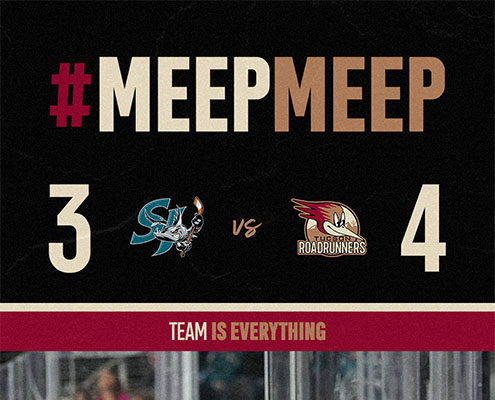 San Jose, California – The Tucson Roadrunners won their fourth consecutive game and earned their second-straight series sweep Saturday with a 4-3 shootout victory against the San Jose Barracuda. Forward Mike Carcone factored into all three regulation scores with a goal and two assists, while goaltender Jon Gillies made 38 saves and went a perfect three-for-three in the shootout. Tucson extends their current winning streak to four games, as they’ll head north to Calgary to face the Wranglers for the first time in franchise history starting on Wednesday.

Roadrunners Captain Adam Cracknell buried the lone goal in the shootout to propel Tucson to a 4-3 win over the Barracuda to complete the weekend sweep, while backstop Jon Gillies went a perfect three-for-three on top of his 38 regulation saves to earn his second-straight win. Both players are in their first seasons in Tucson after previously spending time within the AHL’s Pacific Division.

DROPPING THE GLOVES – Saturday’s action began with a brawl between Tucson and San Jose’s starting lineups, resulting in four players from each team being given game misconducts. Travis Barron, Hudson Elynuik, Tyson Empey, and Vlad Kolyachonok for Tucson, as well as Patrick McGrath, Adam Raska, Patrick Sieloff, and Jasper Weatherby for San Jose all exchanged blows before the puck could be dropped. In all, 170 penalty minutes were assessed in the series finale to 17 different players.

Tucson forward Travis Barron and San Jose’s Jasper Weatherby lined up for the opening face-off Saturday afternoon, but instead broke out into one of the four fights to open the series finale at the Tech CU Arena. The pair were among the eight players, four from each team, to receive game misconducts and miss the remainder of the Roadrunners 4-3 shootout win.

“I think every line is clicking and every line is doing their job right now. We have to keep rolling with it, keep doing our job, and good things are going to happen.”

Roadrunners forward Mike Carcone on Saturday’s 4-3 shootout win over the San Jose Barracuda. Carcone tallied a goal and two assists to extend his point streak to five games, with four multiple-point performances during that span.

Before the puck could be dropped in Saturday’s series finale, both starting lineups dropped the gloves for a line brawl between the Roadrunners and Barracuda. After everything was sorted out, each team was down to nine forwards and five defensemen for the remainder of the game. The melee ignited Tucson’s offense to start the contest, as they outshot San Jose with a season-high 16 shots to their five in the first frame and jumped out to a 2-0 lead. Nathan Smith found the back of the net exactly halfway through the opening period for his first goal as a Roadrunner, before Jean-Sebastien Dea extended the advantage to 2-0 less than a minute and a half later. Assisting on both goals was forward Mike Carcone for his fourth multi-point performance during his five-game scoring streak, while Dea also reached five-straight outings with a point with the goal. The first period ended how it began, as more penalties were assessed to both teams and Tucson wound up on the penalty-kill to open the middle frame. Shortly after their power-play ended, San Jose got on the board with their first goal of the night 2:13 into the period. The Barracuda tied up the contest at 2-2 just past the midway point of the frame with the fourth even-strength goal of the evening. San Jose kept rolling with their third consecutive goal of the period, this time on the power-play with 3:23 left to play before the second intermission. The goal gave the Barracuda their first lead of the night, but it was short-lived as Mike Carcone evened the score at 3-3 just 39 seconds later with his third point of the game. The goal moved Carcone into a tie for second place in the American Hockey League for both assists (8) and total points (11). The Roadrunners and Barracuda entered the third period still tied at 3-3 and nearly even in shots at 23 to 24, respectively. Despite a pair of power-plays for both teams, the third period was without a goal to send Tucson and San Jose to overtime still even at 3-3. Tucson got four shots off in the extra three-on-three period and San Jose got three shots on the net, but the five-minute overtime came and went without a goal, sending the game to a shootout. Adam Cracknell slipped the puck past San Jose’s Eetu Makiniemi in the first round and Jon Gillies shut down all three Barracuda attempts to give Tucson a 4-3 victory and two-game series sweep to begin the road trip.

Tucson Roadrunners Road Ahead: Rolling On The Road
Scroll to top