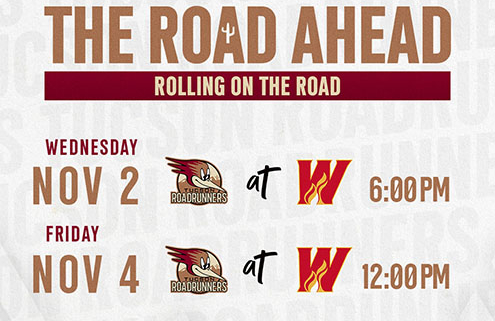 The 5-1-0-0 Roadrunners continue their road trip with a pair of games against the Calgary Wranglers at the Scotiabank Saddledome Wednesday and Friday. The series marks the first trip to Calgary for Tucson, and first two meetings against the new AHL affiliate of the Calgary Flames.

How Sweep It Is

Tucson swept their second-straight weekend series to extend their current winning streak to four games. The Roadrunners have outscored their opponents by nine during this stretch, as seven different players have recorded ten total multiple-point performances. Tucson has posted a multi-goal period in each of the four wins, including three consecutive frames with at least two goals across the weekend against San Jose. The Roadrunners scored five unanswered goals in the series opener to defeat the Barracuda 5-1, before rallying to a 4-3 shootout win in the finale on Saturday. Tucson is the only team in the AHL’s Pacific Division without a home loss, and their three total road victories lead the Division.

The Roadrunners have jumped out to their third start of 5-1-0-0 or better over the last four seasons and have now earned at least nine of the first 12 possible points in six of their seven total years in Southern Arizona. Tucson has been successful on both sides of the ice, with their goals per-game (3.83) and goals allowed per-game (2.83) both in the top three of the AHL’s Pacific Division. The Roadrunners are one of just three teams to be in the top ten in the AHL for both goals for and goals against (Ontario, Manitoba). In addition, their overall goal differential of six trails only the first-place Ontario Reign for the best in the Pacific.

Forward Mike Carcone has been on a tear to start his third season in the organization, tallying three goals and eight assists through the first six games. His 11 points are tied for the best month of October in Roadrunners history, previously reached by Lane Pederson (8g 3a) in 2019 and Conor Garland (3g 8a) in 2018. Carcone has matched the feat in just six games, while Pederson and Garland appeared in seven games in their high-scoring Octobers.

After facing off with the Calgary Wranglers for the first time this week, the Roadrunners will return home on Friday, November 11 and Saturday, November 12, to host the Coachella Valley Firebirds for their first-ever meetings. The two-game set will feature the first Faith and Family Night of the season with a magnetic schedule giveaway for the first 1,500 fans, presented by Proforma. The series will conclude with the Roadrunners Military Appreciation Night, featuring a pregame Hockey & Hops event as well as a post-game jersey auction. The jerseys auctioned off will be Tucson’s game-worn Military Specialty Jerseys, presented by VetTix. For more information and to purchase tickets, click HERE.

After Saturday’s 4-3 shootout win against San Jose, the Roadrunners have now won three-straight contests decided by a shootout dating back to March 18, 2022, also against the Barracuda. Adam Cracknell netted the only goal of Saturday’s shootout, while current Roadrunners Mike Carcone and Jan Jenik were successful in Tucson’s last shooutout against San Jose to begin the streak. Overall, Tucson had a 3-1 record in shootouts last season, with Ivan Prosvetov in net for all three wins. Jon Gillies was between the pipes for Tucson on Saturday and kept the Barracuda out of the net in the shootout to earn his second consecutive win.

Goalies Get It Done

Tucson’s goaltenders Ivan Prosvetov and Jon Gillies each put up impressive performances over the weekend with San Jose, as both recorded season-highs of 38 saves in winning efforts for the Roadrunners. Prosvetov shined in the series opener, only allowing one goal and shutting out the Barracuda for the final 47:14 of the contest. Gillies was in net for the next game and stopped a season-high 16 shots in the middle frame, before going a perfect three-for-three in the shootout for the win. Through six games this season, Tucson has allowed the second-fewest goals in the AHL’s Pacific Division at 17. Their upcoming opponent, the Calgary Wranglers, have surrendered the second-most in the Division with 26.

Keys For Calgary The Calgary Wranglers biggest strength so far this year is their special-teams, as they are tied for the most power-play goals (nine) in the AHL’s Pacific Division and lead the Division with a power-play percentage of 27.3%. Despite having the fewest trips to the man-advantage in the Pacific, Tucson is tied for the fifth-most power-play goals with five. The Roadrunners are also fifth in penalty-kill percentage at 81.5%, just ahead of the Wranglers (80.6%).

The Roadrunners continue their road trip with several point streaks still active after the series sweep of San Jose. Forwards Mike Carcone (3g 8a) and Jean-Sebastien Dea (3g 4a) have recorded a point in five-straight outings, while defenseman Cam Dineen (1g 4a) has extended his single-season point streak to a career-high four games. In addition, goaltender Ivan Prosvetov has an individual three-game winning streak to open the season, while Jon Gillies has won each of his last two outings.

Saturday’s matchup between the Roadrunners and San Jose Barracuda set a Tucson franchise record for most combined penalty minutes in a game with 170. 86 of those were attributed to the Roadrunners to also set a franchise mark for most penalty minutes by Tucson in a game. 158 of the 170 minutes came in the first period, all the way from the opening face-off to the end of the frame. The previous game with the most penalty minutes was on December 28, 2016, between the Roadrunners and Stockton Heat. Backstop Jon Gillies was in goal for both contests, as he played for Stockton in 2016 and earned the win with Tucson on Saturday.

A new episode of the Tucson Roadrunners Insider Podcast released after Saturday’s 4-3 shootout victory against the San Jose Barracuda. “Voice of the Roadrunners” Adrian Denny and TucsonRoadrunners.com’s Jimmy Peebles discussed the weekend sweep and four-game win streak, before previewing Tucson’s week in Calgary. The podcast, including interviews with Mike Carcone, Ben McCartney, and Cam Crotty, can be found on the iHeartRadio App. In addition, Roadrunners Happy Hour airs every Tuesday at 5 p.m. on FOX Sports 1450AM and the iHeartRadio app, with a podcast version also available after each episode on the iHeartRadio app. This week, co-hosts Adrian Denny, Brett Fera, and Kim Cota-Robles will be joined by Roadrunners leading scorer Mike Carcone.