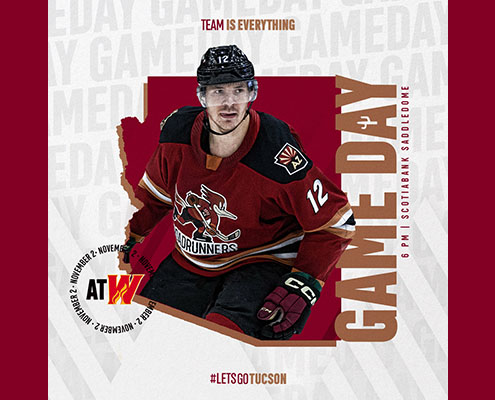 The Roadrunners reach their second stop on the four-game road trip for the first of two meetings with the Calgary Wranglers Wednesday and Friday. The two-game set will wrap up Tucson’s current stint on the road, after back-to-back wins over the San Jose Barracuda last Friday and Saturday. The Roadrunners are in Canada this week for the first time since February 9, 2022, when they took on the Abbotsford Canucks.

Three Things
1) Tucson rides into Calgary on a four-game win streak dating back to October 22 at home against Bakersfield, while the Wranglers have gone 2-2-0-0 with back-to-back series splits during that span. Calgary is looking for their first win at the Scotiabank Saddledome after dropping their previous two home games against Coachella Valley to start the season. The Roadrunners have won each of the last two meetings with the Calgary Flames AHL affiliate to open a season, which were against the Stockton Heat. This includes last year’s 1-0 overtime victory on Opening Night on October 15, 2021, in Stockton. Tucson is undefeated in the first game of a series this season, outscoring their opponents 12 to five across three series openers.

2) Scoring early and often has been the key for the Roadrunners through six games this season, as they are 4-0-0-0 when netting the first goal and average 3.83 goals per game, the sixth highest in the American Hockey League. In addition, Tucson has notched seven multi-goal periods out of 18 and haven’t been shutout in consecutive frames this year. The Roadrunners have never lost when leading after the first or second period and are 4-0-0-0 in games decided by two goals or less. On the other side of the ice, Tucson has held their opponents to three goals or less in each of their last four contests and are one of just three teams in the AHL in the top ten for both goals for and goals against (Ontario, Manitoba).

3) The Roadrunners and Wranglers are meeting for the first time since the Calgary Flames AHL affiliate moved north to Alberta to join the NHL club in Calgary. Tucson has a handful of players with ties to Calgary and the Flames, as Roadrunners Captain Adam Cracknell was drafted by the Flames in the Ninth Round (#279 Overall) of the 2004 NHL Entry Draft and played for their ECHL affiliate in Las Vegas at the time, also called the Wranglers. In addition, Tucson backstop Jon Gillies was drafted by Calgary in the Third Round (#75 Overall) of the 2012 NHL Entry Draft and appeared in 160 games with the AHL’s Stockton Heat from 2015 to 2020. Forward Hudson Elynuik is returning to his hometown of Calgary to play professional hockey for the first time since the 2020-2021 campaign as a member of the Toronto Marlies.

“When you get to play with those two guys, it makes the game a lot easier. They’re both really gifted, and the way play is unbelievable. We just have to keep that momentum going.”

Roadrunners forward Ben McCartney on playing alongside Tucson’s leading scorers Mike Carcone and Jean-Sebastien Dea. McCartney made his season debut on Friday in San Jose and tallied a pair of assists the following night.

Number to Know
38 – The number of saves made by Roadrunners goaltenders Ivan Prosvetov and Jon Gillies in back-to-back games against the San Jose Barracuda. Prosvetov is currently third in the AHL with a goals allowed average of 1.68, after winning his third consecutive start to open his fourth professional season on Friday. Meanwhile, Gillies has won each of his last two outings and went a perfect three-for-three in Saturday’s shootout against the Barracuda. The 38 saves were the most for Prosvetov since January 9, 2022, and the most for Gillies since February 12, 2020, which was another road matchup against San Jose.

We’re Doing It Live
Tonight’s game will be broadcast live on AHLtv, as well as on the radio on FOX Sports 1450AM and the iHeartRadio app. Coverage will start at 5:45 p.m. with Roadrunners Warm-Up hosted by Jimmy Peebles, before “Voice of the Roadrunners” Adrian Denny has all the action from the Saddledome.