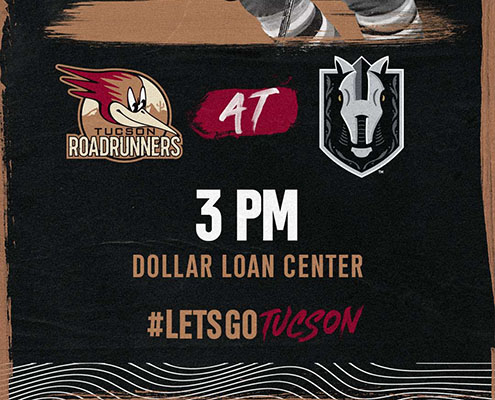 The Roadrunners will wrap up the preseason Sunday afternoon, as they’ll travel to Henderson for the second of two games against the Silver Knights. Tucson is coming off of a 5-2 win over the Vegas Golden Knights AHL affiliate at home on Friday, as 13 Roadrunners recorded a point in the win. After Sunday’s exhibition contest, Tucson will stay put in Nevada to open the regular season the following weekend against Henderson.

Three Things
1) The Roadrunners will look to continue their success from Friday’s preseason opener at the Tucson Arena. Tucson took down the Silver Knights by a score of 5-2 behind two-point nights from Lukas Klok and Liam Kirk, each with a goal and an assist. Tucson held the Silver Knights scoreless while at even-strength, with both of Henderson’s goals coming on the man-advantage. The Roadrunners matched Henderson’s special teams, as two of Tucson’s five goals were scored on the man-advantage by Kirk and forward Cameron Hebig. An empty-net strike by defenseman Ronald Knot sealed the win in the final minutes of the game.

2) Aside from the 5-2 victory over the Silver Knights on Friday, the Roadrunners also dominated shots on goal. Tucson tallied double-digit shots in each period, while holding Henderson to seven shots or less in each frame. Leading 3-1, the Roadrunners fired off the first 11 shots of the third period, before finishing the frame with a game-high 16 shots on goal. The Roadrunners and Silver Knights were identical in terms of power-play effectiveness at two-for-five, and both teams racked up 15 penalty minutes on six infractions apiece. Among those infractions were five-minute majors resulting from a third-period fight between Tucson’s Kaid Oliver and Henderson’s Darian Skeoch.

3) After Friday’s preseason opener, the Roadrunners announced a handful of roster moves. Tucson has returned Kameron Kielly, Gabe Guertler, Tim Davison and Paul McAvoy to the Atlanta Gladiators, ECHL affiliate of the Arizona Coyotes. Also assigned to Atlanta were forward Kaid Oliver and goaltender Tyler Parks. Additionally, forward Michal Mrazik was released from his Training Camp Tryout. Tucson’s roster is now down to 19 skaters and two goaltenders entering Sunday’s final exhibition matchup before the regular season on Friday, October 14. 11 of the 21 total players appeared with the Roadrunners during the 2021-2022 campaign.

“Obviously, it wasn’t how we wanted the season to go for us three last year. We were just looking forward to getting back on the ice and getting ready for this season. I was happy to be back and healthy and playing again with the guys.”

Roadrunners forward Ryan McGregor on returning to the ice this preseason after missing significant time last year with injury. McGregor was on a forward line Friday with a pair of players in similar situations, Hudson Elynuik and Liam Kirk. All three recorded a point in Friday’s preseason opener.

Number to Know
7 – The number of returning Roadrunners from the 2021-2022 season in Friday’s night roster against Henderson. Five of the six skaters in the lineup recorded a point, while goaltender David Tendeck stopped 13 of 15 shots faced with a clean first period. Both power-play goals were scored by 2021-2022 forwards: Liam Kirk in the middle frame and Cameron Hebig in the third period. Forwards Ryan McGregor, Travis Barron, and Hudson Elynuik all tallied assists in the win.

We’re Doing It Live
Today’s game audio will be streamed live at TucsonRoadrunners.com, as well as on the team’s YouTube, Facebook, and Twitter platforms. Coverage will start 15 minutes prior to the opening face-off with Roadrunners Warm-Up hosted by Jimmy Peebles, before “Voice of the Roadrunners” Adrian Denny has all the action from the Dollar Loan Center in Henderson.