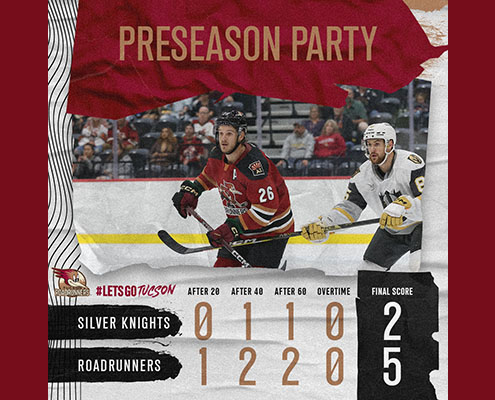 Tucson, Arizona – The Tucson Roadrunners opened the 2022 Preseason with their first of two games against the Henderson Silver Knights, AHL affiliate of the Vegas Golden Knights. With seven returning players in the lineup, Tucson took down Henderson by a score of 5-2 in front of a home crowd. Scoring for the Roadrunners was a mix of new and returning skaters, while Tucson goaltender David Tendeck made 13 saves in the win.

SHOOTING THEIR SHOT – The Roadrunners outshot the Silver Knights in all three periods of play Friday night, for a final total of 40 shots on goal to Henderson’s 15. Tucson surrendered seven shots to Henderson in the opening frame, before holding the Silver Knights to just four shots in each of the final two periods of play. On the other end of the ice, the Roadrunners recorded double-digit shot totals in all three periods, with each of the first 11 shots in the final 20 minutes of the contest.

Roadrunners forward Liam Kirk made his return to the Tucson lineup Friday, after last suiting up for the Roadrunners on November 6, 2022. Kirk tallied a power-play goal in the opening minutes of the second period to extend Tucson’s lead to 2-0, before notching an assist on a Cameron Hebig power-play strike in the third period.

“The boys played really well. Everything from our defensive zone to our offensive zone, we were flawless. The boys really came to play today, and I thought Training Camp has been great so far. It was really good to see.”

Roadrunners goaltender David Tendeck on Tucson’s 5-2 win over the Henderson Silver Knights Friday Night at the Tucson Arena. The 22-year-old netminder only saw 15 shots on goal in the Roadrunners preseason opener.

Tucson started the 2022 preseason on a positive note with a goal by newcomer Lukas Klok from the middle of the Henderson zone. Assisting on the score were returning Roadrunners forwards Hudson Elynuik and Travis Barron to give Tucson a 1-0 advantage with just over seven and a half minutes to play in the opening frame. Klok’s goal marked the only scoring of the opening frame, as Tucson backstop David Tendeck went a clean seven-for-seven in saves. The Roadrunners kept it rolling with the first goal of the second period, scored by second-year forward Liam Kirk on the first Tucson power-play of the evening. The goal marked Kirk’s first since October 29, 2021, after missing significant time due to injury. Henderson got on the board with 6:35 gone by in the middle frame, scoring on their first man-advantage of the contest. The goal came less than three minutes after Tucson’s second score of the night, as the Roadrunners maintained the lead at 2-1. That lead was extended back out to two goals with a score by the Roadrunners less than a minute after Henderson’s power-play tally. Scoring the goal was forward Gabe Guertler, who was up on a professional tryout from Tucson’s new ECHL affiliate, the Atlanta Gladiators. Guertler led the Gladiators in games played last season, while finishing third on the team for points with 41 (19g 22a). Assisting on the score were Guertler’s 2021-2022 Atlanta teammates and Tucson linemates, Kameron Kielly and Paul McAvoy. The remaining 12:27 of the second period was without a goal, as the Roadrunners entered the final 20 minutes of play with a 3-1 advantage. The Roadrunners didn’t let up in the third period, recording the first 11 shots on goal in the final frame of action. A fight occurred for the second-straight preseason hockey game at the Tucson Arena, as Kaid Oliver dropped the gloves with Henderson’s Darian Skeoch. The Silver Knights pulled to within a goal of Tucson with their second power-play strike of the night and second shot of the third period. The Roadrunners reacquired a two-goal lead with their second power-play goal of the contest, scored by returning Roadrunner Cameron Hebig. A Ronald Knot empty-net strike put the game away for Tucson, with the Roadrunners coming out on top by a final score of 5-2.