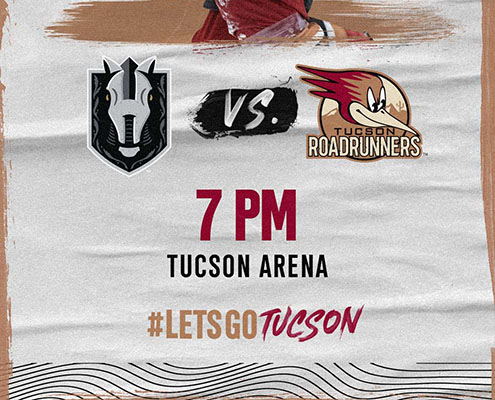 The Roadrunners are back on the ice Friday night at the Tucson Arena, as they’ll face off with the Henderson Silver Knights in the first of two preseason contests. Tucson will start the 2022-2023 slate with four consecutive games against the Silver Knights: two exhibition matchups, followed by a pair of games as part of opening weekend in Henderson. Friday’s game marks the return of Steve Potvin as Head Coach of the Roadrunners, after serving as Associate Head Coach last season. Potvin is joined by longtime Tucson Assistant Coach John Slaney, and new Roadrunners Assistant Coach Zack Stortini.

Three Things
1) In their first game since April 29, the Roadrunners will have a number of familiar faces take the ice at the Tucson Arena. Tucson’s current roster features 11 players from last season, including defenseman Cam Crotty and forward Cam Hebig, both returning for their third seasons after skating in all 68 games last year. Also back for his third season on the Tucson blue line is 2019 first-round pick, Victor Soderstrom. Forwards Ryan McGregor, Hudson Elynuik and Liam Kirk will all suit up after missing significant time last season with injuries. McGregor enters his third season with the Roadrunners, while Elynuik and Kirk are back for season two in the desert.

2) Along with the returning players from last season, the Roadrunners and General Manager John Ferguson added some standout free agents from across the AHL. From the Pacific Division, forward Adam Cracknell (Bakersfield) and defenseman Devante Stephens (Abbotsford) look to add depth and leadership to their positions, while forward Jean-Sebastien Dea comes to the desert on a two-way NHL contract with the Coyotes all the way from the Laval Rocket. Cracknell and Dea bring veteran leadership and experience to Tucson, while Stephens is coming off career highs in games played (59), assists (12), and total points (15).

3) Tucson’s Training Camp roster is rounded out by names to keep an eye on in the upcoming season, as several Coyotes prospects are making their way up the organization to the Roadrunners. Among them are former teammates in the KHL and on the Czech Olympic Team, defensemen Ronald Knot and Lukas Klok. Also looking to make his Roadrunners debut is forward Nathan Smith, who appeared in 10 NHL games for the Arizona Coyotes last season. In addition, Tucson will feature a handful of players on professional tryouts from their new ECHL affiliate, the Atlanta Gladiators.

“I’ve been trying to be good defensively first. When you have good defense, good offense comes naturally. I trust my instincts and play as hard as I can, sometimes (the puck) just goes in.”

Roadrunners forward Jean-Sebastien Dea on his ability to produce on offense. “JSD” joins Tucson after leading the Laval Rocket (AHL) in goals last season with 26.

We’re Doing It Live
Tonight’s game audio will be broadcast live on FOX Sports 1450AM and the iHeartRadio App, as “Voice of the Roadrunners” Adrian Denny will have all the action from the Tucson Arena. Coverage will start 15 minutes prior to the opening face-off with Roadrunners Warm-Up hosted by Jimmy Peebles.