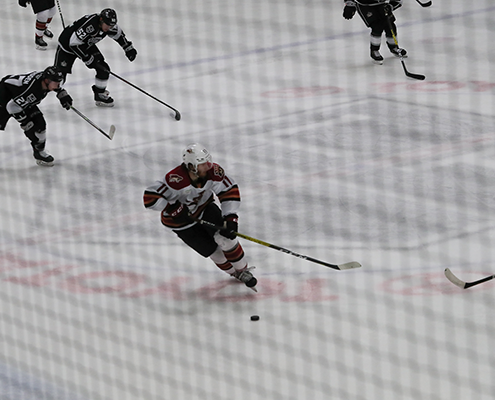 ROADRUNNERS HOLD ON FOR VICTORY OVER ONTARIO

El Segundo, California – The Tucson Roadrunners led from tape-to-tape in a 4-2 over the Ontario Reign in preseason action Monday afternoon at the Toyota Sports and Performance Center.

The Roadrunners struck first in this contest, as veteran winger Michael Bunting got the scoring started 6:45 into the first, with his second goal in as many games, assisted by Cam Dineen and Kevin Roy. Ontario evened the score at one with a goal by defenseman Austin Strand. The teams entered the first intermission tied at one.

The second period brought a pair goals for the Roadrunners, with the team wasting no time reclaiming the lead thanks to a goal by Jordan Schmaltz a little over a minute into the period. The second goal came less than six minutes later, off of the stick of Kevin Hancock. Ontario forward Akil Thomas scored late into the period to cut Tucson’s lead in half at one, with 1:23 left on the clock.

The Roadrunners held onto their one-goal lead throughout the third period, securing their win with an empty-net goal by rookie Nate Sucese in the final minute.

Tucson goaltender Chris Nell stopped 25 of the 27 shots that came his way, capped off by a flawless third period.

The Roadrunners will return to Tucson for two preseason matchups against the San Jose Barracuda, the first of which will be this Wednesday, January 27th, at 5 p.m. You can listen to the game in Tucson on Fox Sports 1450 AM and on the iHeart Radio app.

“We were happy with the total effort from every player over the weekend. I thought the players demanded more from themselves and made improvements after the first game. Loved the effort from the D; being short staffed for the two games. I saw both defensive and offensive players willing to block shots for a win, that’s encouraging!”

DON’T OVERLOOK IT
FINISHING STRONG – Over the final 94 minutes of the Roadrunners’ pair of preseason contests against the Reign, Tucson outscored Ontario 7-2 and held the home team scoreless in both of the third periods. Goaltender Chris Nell is now 41 for 43 for saves in nearly five periods of action for Tucson.

Starting center Kevin Hancock makes his way through center ice against Ontario Monday. Hancock scored his first goal of the season 6:51 into the second period, assisted by Jalen Smereck and Ryan Scarfo. Hancock had four goals and three assists in his rookie campaign last year with the Roadrunners and will look to add to those career numbers this year, likely serving a larger role for the team.