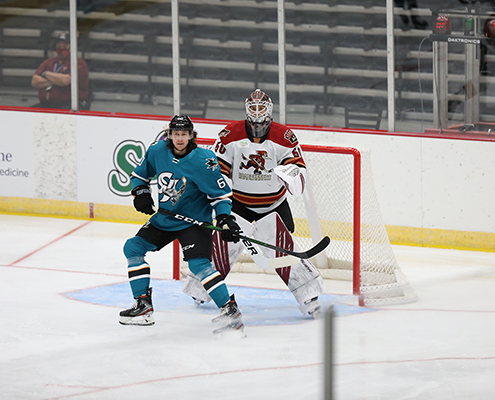 Tucson, Arizona– The Roadrunners played their third preseason game in four games Wednesday evening, taking on the San Jose Barracuda at the Tucson Convention Center. The Roadrunners would tie the game late into the third, only for San Jose to answer back and win the game.

The Roadrunners came out of the gate strong, scoring two goals less than a minute apart in the first period, thanks to goals by Kevin Hancock and Blake Speers. Newcomers Ryan McGregor and Cameron Hebig each tallied an assist on the Hancock goal. The teams were nearly dead even in the shots on goal category, 13-12 in favor of Tucson. The Roadrunners entered the first intermission with a strong 2-0 lead.

The second period was relatively quiet for the Roadrunners. San Jose forward Joachim Blichfeld scored a goal 11:28 into the period, but the number of shots were down from first period totals. Like their previous game, the Roadrunners would enter the final period leading by a goal.

The Roadrunners held onto their one-goal lead for the first 3:53 of the third period, but a goal by Barracuda forward Brandon Coe evened the score at 2. With the clock winding down in the third period, San Jose would take their first lead of the night with Joachim Blichfeld’s second score of the game. The Roadrunners went on a crucial power-play and scored the equalizing goal with 1:24 left in regulation. San Jose quickly answered with a goal of their own to once again take the lead 4-3 with 24 seconds left on the clock. The score would hold, and 60 minutes was enough to decide this contest.

Tucson’s only returning goaltender this season, Ivan Prosvetov was in net tonight and was solid between the pipes, stopping 32 of the 36 shots that came his way. San Jose’s netminder Josef Korenar was 22 for 25.

The Roadrunners will play their final preseason contest on Monday, February 1st at the TCC against the same San Jose Barracuda, at 5 p.m. You can listen to the game in Tucson on FOX 1450 AM and on the iHeart Radio app.

“We’re going to find ways to win, and we’ve got a lot of guys in the locker room who are used to winning and want to win.”

Kevin Hancock skates down the line after scoring the first goal of the game and his second goal in as many games. Less than a minute later, Blake Speers would score another goal to give the Roadrunners a two-goal lead early in the first period. Hancock is tied with fellow forwards Michael Bunting and Lane Pederson for most goals through three preseason games with two each.