HILL SHUTS OUT WILD, ROADRUNNERS RETURN TO BEING AHL’S BEST

Turning away all 30 shots faced, Adin Hill stole the show as the Roadrunners took down the Iowa Wild by a score of 2-0 Tuesday in Des Moines.

A suffocating 60-minute effort that was backboned by the fourth-year Roadrunners’ ninth career shutout featured very little “give” by Tucson in terms of Iowa’s chances and was yet another game the team led from start to finish.

Returning to the team after a nine-day recall to the parent Arizona Coyotes, captain Michael Chaput gave his team a 1-0 lead 16:52 in the first period.  Following a zone entry with Michael Bunting, 27 dropped the puck off to 26 at the glove-side circle – where his release would beat Mat Robson, who was starting once again for Iowa.

Just over five minutes into the second Jon Martin doubled Tucson’s lead with his third goal in two games inside Wells Fargo Arena.  A full 200-foot play, the fourth line – also casting Jeremy Gregoire and Kevin Hancock once again – pulled the puck free from below their own goal line following a board battle and then went the length of the ice before the power forward jammed home a loose puck to conclude an odd-man rush.

That was the entire extent of the scoring in the affair, as mentioned, it truly was the defensive effort that shined for the duration of the win.  A modified breakaway stop in the first and a one-time attempt from the slot in the third highlighted Hill’s workload, which wasn’t his busiest or flashiest night ever, but it was another perfect one.

“We have a real tight-knit group here.  We just keep on looking forward to the next game and try and get two more points.  It was a great trip to Iowa, coming away with four points and now it’s off to San Antonio as we look for two points there.”

A humble 6-foot-6 netminder commending his team first and foremost following his big night and win.  Through 24 games played, the team’s “all business” attitude hasn’t waivered a bit, even through all their success.

Less than 24 hours after losing one of their top pair defenseman, power play quarterbacks and thorough penalty killers in Robbie Russo, the remaining blue line cast did an excellent job of limiting the high quality chances by Iowa in the win.  As previously stated, Hill’s perfect performance wasn’t filled with highlight reel after highlight reel stop, as a lot of the chances came from low-risk areas.

After an extra, unnecessary shove on a puck exiting the zone just seconds prior, Andy Miele had enough of the 20-year-old rookie from Iowa.  Giving up three inches in the scrap, not only did the veteran hold his own but he also secured two points for the takedown to end it.

Nothing but love for the big man following his 30-save shutout.  Now it’s onward to Texas’ with the league’s best win percentage (.792). 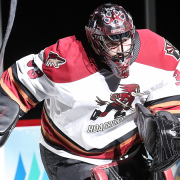