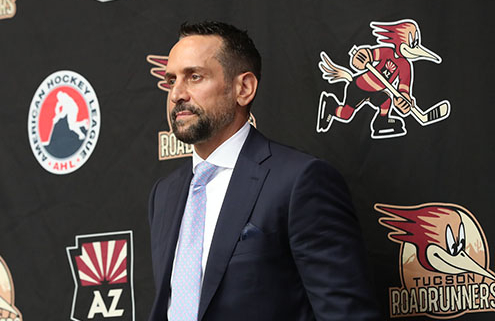 Listen to “All Aboard for Head Coach Steve Potvin” on Spreaker.

Q: Steve, the team has the entire week in the Las Vegas area to get ready for opening night on Friday against the Henderson Silver Knights, you guys have to be excited.

A: Absolutely, this is a rare opportunity for our team to be together this long before the start of the season. We’re taking every advantage, and it’s a good time to get some extra team building in. Typically, that doesn’t happen until a lot later into the season when guys start to feel comfortable with each other. Honestly, it’s been great. The boys practiced hard today and they’re raring to go, it’s been a long preseason for some of these guys. They’ve been through rookie camp, the NHL camp, and now AHL camp. They’re ready and they want to get playing.

Q: We added four players to the lineup after our preseason ended on Sunday: forwards Boko Imama and Laurent Dauphin, defenseman Cam Dineen and goaltender Jon Gillies. The Coyotes got deeper up top, and we have guys with us now that were NHL regulars last season. We look like a deep group heading into the season.

A: A lot of these guys really took their time this summer to reflect, and I think they took every opportunity to grow their craft. They spent the necessary time in the gym building their bodies, they spent a lot of extra time on the ice, and it showed in camp. We’re looking forward to seeing how they do this season.

Q: We have a strong leadership group here with our team. Going and getting guys like Laurent Dauphin (Alternate Captain with Tucson in 2018-2019) and Adam Cracknell (998 professional games) in free agency, and even having Jon Gillies (seven professional seasons) in between the pipes.

A: You add those guys mentioned to an already strong team with guys like Mike Carcone, Boko Imama, Cam Crotty, Travis Barron and Tyson Empey, those are all leaders in the room. Adding those guys solidifies our lineup and we have leaders that can lead from above and below. That’s a real rarity for a lot of teams. We’re very fortunate to have all of them.

Q: How strong is our current goaltender tandem of Ivan Prosvetov and Jon Gillies, both with NHL experience?

A: There’s nothing better than internal competition, guys show up with a little bit more quality in the day-to-day process. Some days, when you’re not really feeling that great and there’s no internal competition, it’s natural to lay off. When there’s somebody right behind you, and they’re pushing to try to gain that starting spot, it keeps everybody on their toes. Typically, they’re going to show up with a little more quality, and less downtime and fatigue. They’re going to be really ready for that competition, and both of those guys definitely want to earn the spot in net.

Q: Our new Assistant Coach, Zack Stortini, actually played against the Roadrunners in 2017 as a member of the San Jose Barracuda. What is it like having him behind the bench with you having coached against him before?

A: I’m glad you brought that up, [Zack’s] actually here next to me and can hear everything I’m saying. It’s been a real pleasure having him. As a player, he’s won championships and he’s a real selfless individual. From a staff perspective, we’re really lucky, but I think the players are just as fortunate to have him around. He’s a guy that they’ll be able to lean on, and he’s very insightful and very skilled.

Q: How does Zack Stortini add to the existing chemistry created by you and Assistant Coach John Slaney on the coaching staff?

A: It’s nice when you have that history and continuity, and we also have [Director of Hockey Operations & Video] Jake Wagman going into year two with the team. It’s a lot easier when you have that continuity already, you and already have a gameplan where everyone understands what the process looks like. Zack is an open-minded coach and an open-minded person, so bringing him in has been seamless. It’s been a lot of fun to see him go through it, and we’re looking forward to seeing a strong season here. I don’t think it’s going to take very long for that chemistry to show.

Q: Adam Cracknell is set to play in his 1000th professional game on Saturday, what does he bring to this team?

A: [Adam] has the ability to make his linemates better. He doesn’t waste an ounce of energy, everything he does has a meaning behind it. He’s very aware of his surroundings, he can read the game and anticipate the game really well. I think he’s going to add a lot of calmness to our locker room. When things start to heat up, he’ll be able to use his emotional control and leadership to guide our guys. He’s also a guy that will step up his game when necessary. He’s a welcome addition and we’re going to lean on him.

Q: This roster has four Olympians and a handful of additional international players making their North American pro debuts. How do you expect this group to mesh with the international element that has been a success for Tucson in recent years?

A: I think when you’re in that type of environment and those types of tournaments, you have to try to gel as quickly as possible and do everything you can for the team. Those guys have been in that environment, and they know what that process is like. They’re elite people, and they know what it takes to be a part of a team. I think those guys are going to be able to manage themselves every day really well and share some of their experiences with our guys. If you’re a leader and can drive yourself through difficult days, guys are going to be able to learn from you. All we’ve seen so far is consistency out of them, and that’s going to bring a lot of calm to our room.

TEAM IS EVERYTHING
Scroll to top