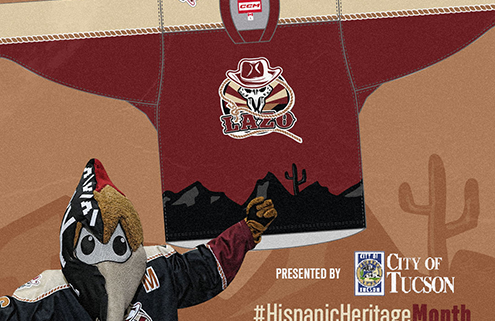 Tucson, Arizona – The Tucson Roadrunners, AHL affiliate of the Arizona Coyotes, have announced this season’s game dates for El Lazo de Tucson Presented by the City of Tucson as the organization continues its Hispanic Heritage Month Celebration.

About El Lazo de Tucson
The Roadrunnners ‘El Lazo’ identity is a continuing effort to embrace all that is Southern Arizona and the history and culture of the community. The El Lazo mark features the skull of a Roadrunner in celebration of Dia de Los Muertos and the All Souls Procession (a public ceremony began in Tucson in 1990). El Lazo, Spanish for ‘lariat’ or ‘lasso’, is taken from the City of Tucson’s city seal that ties together the modern city and the historic area that is now Tucson. The Tucson Rodeo and Parade is held every February and celebrates the ranching history of the area. The skull in the logo is wearing a cowboy hat to reflect this historic tradition in Southern Arizona. The team unveiled their El Lazo identity and 2022-2023 marks their third season playing as El Lazo de Tucson.

The Roadrunners first El Lazo de Tucson game on Friday, January 20 will unveil their latest El Lazo jerseys featuring the Roadrunners red and cream colors with a desert background along the bottom.

All El Lazo games feature performances from the dancers and musicians with Mariachi Los Diablitos from Sunnyside High School.

The Roadrunners kicked off Hispanic Heritage Month by launching a Spanish language website in TucsonRoadruners.com/Espanol and a Spanish Facebook page at Facebook.com/LosTucsonRoadrunners.

The Roadrunners open the regular season in Henderson, Nevada against the Silver Knights Friday at 7 p.m. and Saturday at 3 p.m. from Dollar Loan Center. All fans can watch on AHLtv in the Weekend Freeview by creating a free account at WatchTheAHL.com. All games will also be broadcast on Fox Sports 1450 AM and the iHeartRadio app with Roadrunners Warm-Up beginning coverage 15 minutes prior to face-off.

Opening Night on Saturday, October 22 presented by the Arizona Daily Star will feature a Food Drive for Impact of Southern Arizona, as well as a Rally Towel giveaway for the first 1,500 fans, presented by Williams and Associates. Sunday’s 4 p.m. contest will be the first of several Family Days on Tucson’s home schedule, with four-person family packs available for purchase HERE. Fans can also participate in a Pre-Game Trick or Treat courtesy of Raytheon, and even take the ice after the Roadrunners for a Post-Game Open Skate.