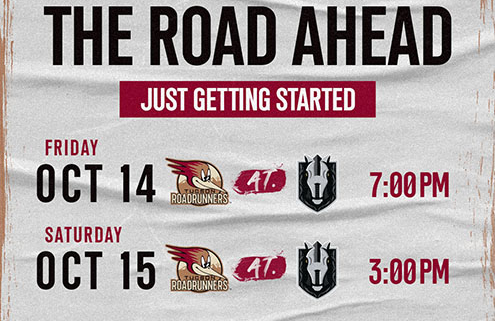 The Roadrunners will open the 2022-2023 regular season this weekend with a pair of games on the road against the Henderson Silver Knights. Game one of 72 is scheduled for Friday, October 14 at 7:00 p.m. MST at the Dollar Loan Center in Henderson. A 3:00 p.m. matinee matchup will take place the following afternoon. Tucson will be looking to win their fifth consecutive season opener, as they begin the year as the designated road team for the fourth-straight campaign. The two-game set marks the Roadrunners first regular season action in the Silver State since the final weekend of March 2022, which resulted in a two-game sweep of Henderson at the Orleans Arena in Las Vegas.

After starting the 2022-2023 season with a pair of games in Henderson against the Silver Knights, the Roadrunners will return home for a pair of games with the Bakersfield Condors. Tucson’s home opener will be Saturday, October 22 at the Tucson Arena, with the game time set for 7 p.m. MST. They’ll wrap up the two-game set with the Condors the following afternoon at 4 p.m. The last time the Roadrunners hosted Bakersfield in the Old Pueblo, Tucson came away with a 3-2 overtime victory on January 29, 2022. Tickets for both contests can be purchased HERE.

Lunch With Your Favorites

To kick off the 2022-2023 regular season, the Roadrunners will host a Face-Off Luncheon at the Tucson Arena Thursday, October 20 at 1 p.m. The opportunity to have lunch with the entire Roadrunners team and hear from General Manager John Ferguson, Team President Bob Hoffman and Head Coach Steve Potvin is $45 for Roadrunners Season Ticket Members, $50 for the General Public and $500 for a table of 10 which also includes a Roadrunners jersey. Fans will also have the opportunity to win signed raffle items and other prizes to support the team’s community efforts throughout Southern Arizona.

More Fun At The Tucson Arena

Aside from regular-season hockey returning to the Tucson Arena when the Roadrunners host the Bakersfield Condors Saturday, October 22 and Sunday, October 23, the team will have a number of events on and around the ice. Saturday’s Opening Night presented by the Arizona Daily Star will feature a Food Drive for Impact of Southern Arizona, as well as a Rally Towel giveaway for the first 1,500 fans, presented by Williams and Associates. Sunday’s 4 p.m. contest will be the first of several Family Days on Tucson’s home schedule, with four-person family packs available for purchase HERE. Fans can also participate in a Pre-Game Trick or Treat courtesy of Raytheon, and even take the ice after the Roadrunners for a Post-Game Open Skate.

Who Got It Done In Preseason

Tucson finished the preseason with a 1-1 record against the Henderson Silver Knights. The Roadrunners outscored the Vegas Golden Knights AHL affiliate by a count of six to four and outshooting them 57 to 33 across the pair of exhibition matchups. Scoring for Tucson were two defensemen and four forwards, comprised of a mix of old and new players. In Friday’s 5-2 victory at the Tucson Arena, defenseman Lukas Klok got the Roadrunners board with a 1-0 lead in the first period, before second-year forward Liam Kirk extended the lead to 2-0 with a power-play strike early in the middle frame. Tucson netted three of the final four goals, scored by forward Gabe Guertler, returning forward Cameron Hebig on the power-play, and new blue-liner Ronald Knot on an empty-net to seal the win. Travis Barron buried the lone goal for the Roadrunners in Sunday’s preseason finale in Henderson, after lighting the lamp a career-high 12 times in 2021-2022.

Following the conclusion of their preseason schedule on Saturday, the Arizona Coyotes have announced a handful of roster moves. On Sunday, it was announced that forwards Mike Carcone and Jan Jenik, along with defenseman Vlad Kolyachonok would be heading to Tucson. In addition, goaltender Jon Gillies, defenseman Cam Dineen, and forwards Boko Imama and Laurent Dauphin have been assigned to the Tucson Roadrunners after clearing waivers on Monday. Carcone, Jenik, Kolyachonok, Dineen and Imama all took the ice for the Roadrunners last season, while Dauphin is returning to Tucson after last appearing with the team in 2019. An original Roadrunner, Dauphin spent three seasons in the Old Pueblo from 2016 to 2019 and served as an alternate captain during the 2018-2019 campaign.

Sunday’s Roadrunners lineup against the Henderson Silver Knights featured four players that represented their countries at the 2022 Winter Olympics in Beijing, China. Having previously played in China with the Kunlun Red Star of the KHL (2019-2020), forward Adam Cracknell returned to Beijing as a member of Team Canada. Cracknell appeared in five games and tallied an assist in a 5-1 win over Germany. Defensemen Ronald Knot and Lukas Klok each represented the Czech Republic, with Knot posting an assist and Klok recording two goals and an assist across four games. Finally, Forward Milos Kelemen earned an assist in seven games with Team Slovakia en route to a bronze medal finish.

After Sunday’s preseason finale against Henderson, “Voice of the Roadrunners” Adrian Denny and TucsonRoadrunners.com’s Jimmy Peebles released the latest episode of the Tucson Roadrunners Insider Podcast. The episode breaks down the preseason, details the current roster, and looks ahead to the regular season. The podcast, including an exclusive interview with Tucson defenseman Cam Crotty, can be found on the iHeartRadio App. In addition, the second Roadrunners Happy Hour of the season will air on FOX Sports 1450AM and the iHeartRadio app on Tuesday at 5 p.m. and will also be available as a podcast on the iHeartRadio app. Join “Voice of the Roadrunners” Adrian Denny, the Arizona Daily Star’s Brett Fera, and new co-host Kim Cota-Robles, as they’ll look ahead to the opening weekend of the regular season, with Roadrunners Head Coach Steve Potvin stopping by at the top of the program.