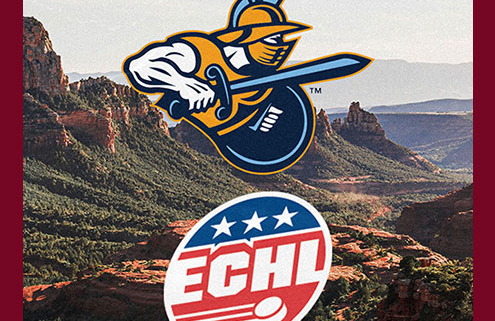 SCOTTSDALE, ARIZONA – Arizona Coyotes General Manager Bill Armstrong announced today that the Coyotes have signed a new affiliation agreement with the Atlanta Gladiators of the ECHL beginning with the 2022-23 season. The Gladiators previously served as the Ottawa Senators’ ECHL affiliate in 2021-2022.

“We are very pleased to once again partner with the Atlanta Gladiators as our new ECHL affiliate. The Gladiators are a first-class organization with a loyal and passionate fan base. We look forward to working with Gladiators President Jerry James and Head Coach Jeff Pyle this season.”

“We’re incredibly excited to be partnering with the Arizona Coyotes and the Tucson Roadrunners as our NHL and AHL affiliates. The Coyotes organization has done a phenomenal job developing young players, and we’re thrilled to be a part of that pipeline.”

“I’m excited to work with Arizona. They have a lot of good young talent, great people to work with, and they will be an exciting team to watch. We look forward to working with their prospects and creating opportunities for them to develop.”

This will be the second time the Gladiators franchise has been an affiliate with the Coyotes, as the clubs previously had a partnership from 2011-15.

The Gladiators franchise is entering its 26th season in the ECHL and plays its home games at Gas South Arena in Duluth, GA. Atlanta, who is one of 28 teams that competes in the ECHL, plays in the South Division of the Eastern Conference. The franchise began play in 1995-96 as the Mobile Mysticks and have since rebranded to the Gwinnett Gladiators (2003-15) and Atlanta Gladiators (2015-present). The franchise has captured three division championships (2005-06, 2011-12, 2012-13) and one conference championship (2005-06).

Pyle has been the Head Coach of the Gladiators since 2018-19, while also serving various hockey operations roles. He previously was the team’s bench boss from 1998-11 before leaving to be the Head Coach of the AHL’s Texas Stars. During his ECHL coaching career, Pyle has recorded 580 wins and coached 1,137 games to rank second in League history in both categories. Pyle also played 12 seasons of professional hockey in the AHL, ACHL, IHL and in Germany.

Atlanta will open the 2022-23 season on October 21 at home against the defending Kelly Cup champion Florida Everblades at Gas South Arena.

With more than 134,000 landings and takeoffs annually, Tucson International Airport offers nonstop flights all day year-round to and from Atlanta that will add convenience and flexibility for quickly getting players in Atlanta to Tucson when they are called-up to the Roadrunners.