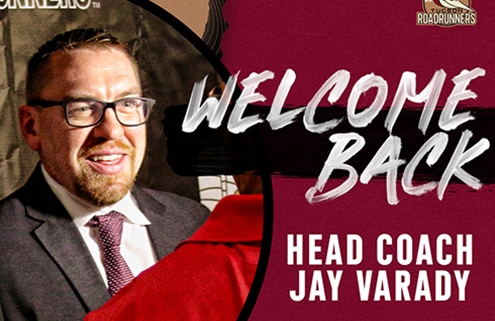 GLENDALE, ARIZONA — Arizona Coyotes General Manager Bill Armstrong announced today that the Coyotes have signed Jay Varady to a three-year contract to serve as Head Coach of the Tucson Roadrunners, the Coyotes’ American Hockey League (AHL) affiliate. As per club policy, terms of the contract were not disclosed.

“Jay is an excellent coach who has led the Roadrunners to a Pacific Division title,” said Armstrong. “Over the past three years, Jay has done a tremendous job developing our prospects and we are thrilled to have him back as our head coach in Tucson.”

Varady spent the 2020-21 season with the Coyotes as part of the team’s NHL coaching staff. He previously served as the head coach of the Roadrunners for two seasons (2018-19 and 2019-20). He was named as Head Coach of the Pacific Division at the 2020 AHL All-Star Classic and guided Tucson to a 70-45-6-5 record including the 2019-20 Pacific Division title in his two seasons with the team.

“I am very excited to be back in the City of Tucson and working with our great players and staff,” said Varady. “We will be committed to winning hockey games and developing Coyotes prospects and I’m looking forward to having our tremendous fans back in TCC to provide us with an incredible home ice advantage.”

Varady joined the Coyotes organization in 2018 from the Kingston Frontenacs of the Ontario Hockey League (OHL) where he led Kingston to a record of 36-23-6-3 in his one season as the team’s head coach. He also guided the Frontenacs to the OHL’s Eastern Conference Finals.

Prior to coaching Kingston, Varady served four seasons as the head coach of the Sioux City Musketeers of the USHL, posting an impressive 136-88-10 record. Varady led his club to the postseason in three of four seasons and won the Anderson Cup, the regular season title in 2016-17. He also led Sioux City to a Clark Cup Final appearance, two Western Conference Final appearances and two Western Conference Championships.

Varady previously coached two seasons (2011-2013) with Ducs d’Angers in France and helped the team win the 2013 regular season title and make an appearance in the league finals.

The Cahokia, IL native joined Angers after eight seasons with the Everett Silvertips of the Western Hockey League where he was an associate coach for three seasons (2007-2011) and an assistant coach for four seasons (2003-2007).

Varady has also served several stints with Team USA. In 2014 and 2016, he coached the American team to the gold medal in the World Junior A Challenge. He won a silver medal at the Hlinka Tournament with Team USA in 2011 and was part of the coaching staff that won gold at the 2010 World Junior Championship in Saskatoon, Sask.

Followon TwitterSubscribeto RSS Feed
RRTV In The Community: A Cool Night Out