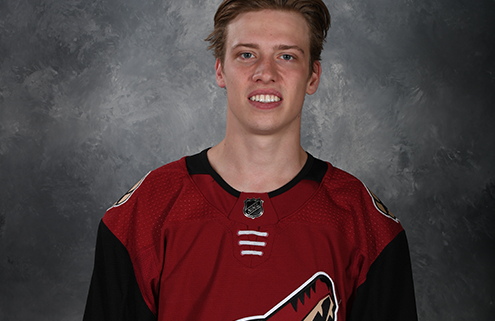 Roadrunners Leading Scorer from this past season Brayden Burke is one of eight players from this year’s Tucson team and one of 17 total that’s played a game with the Roadrunners that is currently participating in Coyotes Training Camp. Here is a transcript of his recent chat with the Tucson media.

On being back in hockey season:
It’s a pretty unique situation, getting back in the middle of June and camp starting in July. It was nice to get down here and get some reps in with the guys on the ice. With camp, you only get two weeks, you just kind of have to jump right in, get ready to learn and try to put the best foot forward as you can every day.

On being home before coming back to Arizona to start back up:
All you can do is just try to do your best, get a workout in, get some shots in every day and just try to stay sharp. A little bit of stickhandling, I knew that there was a good chance that the season would start back up and I’d be up here trying to help the team.

On Tucson coaching staff being with Coyotes:
Extra minds, extra hockey bodies, never hurts anyone when you have a long grind like the playoffs are going to be. Having a couple of extra eyes can only help. We’re all Coyotes right now and we’re just trying to win.

On being back on the ice:
Right now there’s only one goal, we’re playing hockey in July. Just trying to help out the team as much as you can, just keep working and trying to get better.

On goal he setup in scrimmage late last week in scrimmage:
(Barrett) Hayton made a nice little play, and I just cut up and was able to find Alex Goligoski skating through the middle, so It was a nice goal to him.

On being back with his Tucson teammates and Head Coach Jay Varady:
It’s definitely nice to see those guys, it’s been two or three months. To see some of your good friends, who have also made the trek, being on the ice with those guys and Jay, it makes it feel like you’re right back into the hockey season. It’s been really nice and I think we’ve all done a good job of coming here ready to go and in decent shape. So I give full kudos to all of the guys here with me.