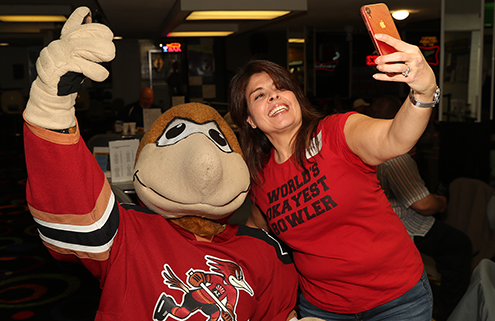 Lots of great stuff this week as the Coyotes began Training Camp before starting their playoff series against Nashville on August 2. Eight players who finished the season on Tucson’s Pacific Division Championship team are in camp.

17 total players of the 32 in camp have played at least one game with the Roadrunners. One of them being our hero Conor Garland. Brett Fera joined media in Phoenix on a Video Call with Conor earlier this week. CLICK HERE to read his article that comes with a big shoutout to Tucson.

Speaking of young scorers, we also got 2019-2020 point leader Brayden Burke on a call with our Tucson media on Thursday.

“When I’m in July normally, without this whole crazy thing going on, I’m at home doing the same things. Working out, skating in small groups, trying to improve and become the best player that I can. So my mindset is simple, it’s just I have probably better coaches, people around me that want to make me better, so I’m just going to go out there and do the same things that I would be in July and if I get lucky to play some real meaningful hockey. I can only get better with this time, so that’s how I’m looking at it.”

To San Diego and Barbusa in Little Italy for this week’s feature. And before you say, oh looks high end, how did you afford that? Don’t worry, with tip, it was only $41.85 for a pair of pies, a Diet Coke and a tasty dessert.

We did get a parking ticket added to the tab however. Good news though came less than a week later. Our appeal was heard and the citation was rescinded.

Menu is HERE if you want to check it out.

Speaking of Coyotes, who’ve played at least one game with Tucson. We got five from Barrett Hayton in February on a Conditioning Assignment.