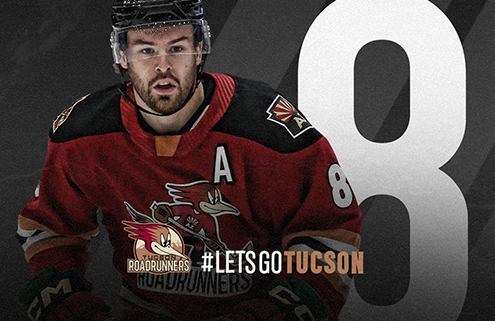 Tucson, Arizona – The American Hockey League announced Tuesday afternoon that Forward Michael Carcone has been named the league’s Player of the Month for December. The third-year Roadrunner was recalled to the Coyotes last week.

The league’s leading scorer put up 10 goals and 20 points in just 10 outings during the month. He capped off his big December by earning his first NHL call-up of the season, where he scored a goal in his first game back with the Arizona Coyotes on December 27 in a 6-3 win over Colorado.

Carcone had six multi-point efforts during the month with Tucson, beginning with consecutive one-goal, one-assist nights on December 4 at San Jose and December 9 against Ontario. He notched his sixth career AHL hat trick on December 13, part of a four-point performance as the Roadrunners downed Coachella Valley, 7-2, and registered two goals and two assists in a 9-4 win at San Diego on December 17. He tallied two goals and an assist on December 20 to lead Tucson to a 3-2 road win over Coachella Valley and added a goal and an assist on December 22 in a 6-2 victory over San Diego.

Carcone leads the AHL in scoring with 42 points (16 goals, 26 assists) in 27 games for Tucson this season, including a league-best 10 power-play goals, 24 power-play points and he is third in the AHL in shots with 104.

Carcone is the first Roadrunner to ever win the award and third-straight player from the Pacific Division to earn Player of the Month honors this season, along with Coachella Valley’s Jesper Froden for October and Calgary’s Matthew Phillips for November.

Carcone is the second Roadrunner in two seasons to have received a recall to the Coyotes with continued consistent offensive play. Forward Matias Maccelli was recalled to the Coyotes on February 28, 2022 and named the February Rookie of the Month the following day.

Carcone has 55 goals and 43 assists for 88 points in 110 career games with the Roadrunners.

1-On-1 With Reece Vitelli 
Scroll to top