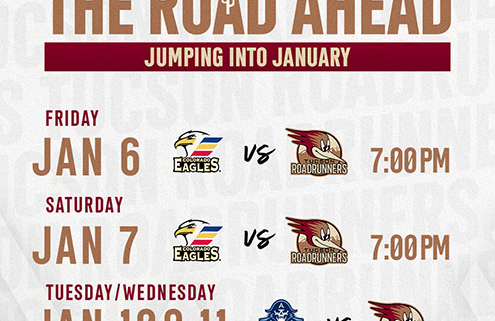 The 14-12-4-0 Roadrunners return home to begin the new year with a four-game home stand at the Tucson Arena, beginning Friday, January 6 against the Colorado Eagles. The series marks the only trip to the desert on the season for the AHL affiliate of the Colorado Avalanche, with four total meetings scheduled between the Roadrunners and Eagles this year. The Roadrunners will have a week of practice leading up to the home stand, with their last game coming on Saturday, December 31, in Texas. Meanwhile, Colorado has a midweek matchup against the Coachella Valley Firebirds before the weekend set in Tucson, as they enter the week at 18-10-2-0 with losses in each of their last two contests.

See You Next Year

With ten total home games in the month of January, there will be plenty of hockey and plenty of fun at the Tucson Arena. The weekend series against Colorado begins with Tucson’s first Health and Wellness night, with a Yoga On Ice Event with Yoga Loft Tucson available for fans. The first Kachina Saturday of 2023 and the series finale with Colorado will be preceded by the fan-favorite Whiskey and Wings pregame event. Other notable dates in January include the first El Lazo de Tucson night of the season on Friday, January 20, the fan-favorite Star Wars Night on Saturday, January 28, and Arizona Coyotes Day the following afternoon on Sunday, January 29. For the full promotions schedule and to purchase tickets, visit TucsonRoadrunners.com/Fun.

Scoring Leaders Leap To The NHL

The Roadrunners were without their top-two leading scorers for the two-game weekend set against the Texas Stars, as Mike Carcone (42 points) and Laurent Dauphin (27 points) were recalled by the Arizona Coyotes. Carcone joined the Coyotes right out of the break and scored a goal in Arizona’s first game since before Christmas, a 6-3 win over the Colorado Avalanche. Dauphin appeared in his second NHL game of the season on December 31 against the Tampa Bay Lighting, where he won a team-leading 62.5% of face-offs taken. The pair represent two of three Roadrunners players to appear with the Coyotes this season, along with forward Jan Jenik.

Tucson recalled forwards Colin Theisen and Reece Vitelli from the ECHL’s Atlanta Gladiators ahead of the series opener with Texas on December 30, and the pair responded by scoring goals 1:09 apart in the third period. The goals were the first of the year with Tucson for both Theisen and Vitelli, as the game also represented Vitelli’s American Hockey League debut. The 21-year-old Vitelli has tallied 15 points (6g 9a) for Atlanta in his first professional season, after he led the WHL’s Prince Albert Raiders in scoring last year with 51 points (25g 26a). Theisen is back with Tucson after he recorded 11 points (5g 6a) in 16 appearances at the end of last season after setting a single season scoring record at Arizona State University with 42 points (19g 23a).

Tucson goaltender Jon Gillies ended 2022 with a pair of strong outings that included back-to-back scoreless first periods. Gillies held the San Diego Gulls scoreless for the opening 37:04 of a 6-2 win on December 22 and kept the highest-scoring team in the AHL, the Texas Stars, from finding the back of the net for the first 23:37 of play on December 31. The Roadrunners have earned a standings point or better in the majority of Gillies’ outings this season, with five wins so far for the 28-year-old in his first year in the desert.

With their first game out of the holiday break, the Roadrunners became the fourth team in the AHL’s Pacific Division to reach 100 goals on the season. The triple-digit goal was scored by Reece Vitelli, who became the 23rd different player to light the lamp for Tucson on the year. Their goals per-game of 3.37 is also fourth in the Pacific Division and in the top-half of the American Hockey League overall. At the turn of the calendar year, the Roadrunners are one of six teams in the AHL’s Pacific Division with a winning record. Tucson is set to take on two of the other teams for the first time this season in January (Colorado, Abbotsford), and have already earned at least one win against the other three (Calgary, Coachella Valley, Ontario).

January 2023 marks a busy month of the season for the Roadrunners, with ten total home games setting a franchise record for the most in a single calendar month. Tucson will have a stretch of 14 games over 26 days overall beginning with Friday’s series opener against Colorado, marking the most games in a month this season for the Roadrunners. The hockey continues into February, as final game of January against Bakersfield represents the start of Tucson’s seven-game Gem Show Road Trip.