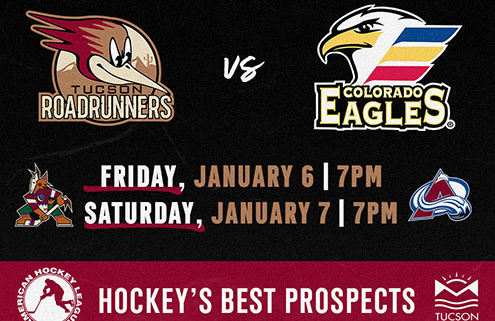 Tucson, Arizona – The Tucson Roadrunners, AHL affiliate of the Arizona Coyotes, open 10 January home games with a weekend of action against the Colorado Eagles Friday and Saturday at 7 p.m. from Tucson Arena.

The visit will mark the only appearance this year for the AHL affiliate of the Colorado Avalanche.

Friday begins with Health and Wellness Night which will feature the first opportunity for Roadrunners fans to do Yoga on the ice before the game with Ashlee McDougall from Yoga Loft Tucson at 4 p.m. Each ticket purchased in the offer will include: entry to the yoga class, a ticket to the hockey game and participants will be entered into a drawing to win exclusive prizes from Lululemon! CLICK HERE for more on the package.

Other games in January include the below with more information available at TucsonRoadrunners.com/Fun.

Half Priced Tickets in select sections

El Lazo de Tucson Presented by the City of Tucson

Half Priced Tickets in select sections

Tucson Roadrunners Road Ahead: Jumping Into January
Scroll to top