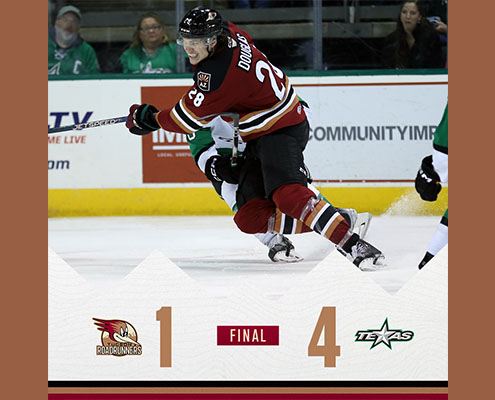 ROADRUNNERS CLOSE OUT 2022 WITH SERIES FINALE LOSS TO TEXAS STARS

Cedar Park, Texas – The Roadrunners fell to the Texas Stars by a score of 4-1 Saturday night at the H-E-B Center to conclude a two-game set from Texas. A third-period comeback attempt by the Roadrunners was stopped by a Stars power-play strike and an empty-net goal in the final 3:16 of regulation, as Tucson and Texas were either tied or separated by one goal for 55:33 of the opening 56:44 of the contest. Jon Gillies stopped 29 of 32 shots faced for Tucson, while forward J.S. Dea extended his active team lead in goals scored to 13 with an even-strength tally in the third period. The Roadrunners will return home and open a four-game home stand at the Tucson Arena on Friday, January 6 against the Colorado Eagles.

Roadrunners forward J.S. Dea put Tucson on the board in Saturday’s series finale with the Texas Stars. His third-period score brought the Roadrunners to within a goal of the first-place Stars, and represented Dea’s 13th goal of the season overall. The 28-year-old is the active team leader in goals scored and has notched eight points over his last nine appearances (1g 7a). His four total shots on goal was tied with Curtis Douglas for the team lead on Saturday.

GILLIES GIVES HIS ALL – Tucson backstop Jon Gillies started in net for Saturday’s series finale against the Texas Stars and stopped 29 of 32 total shots faced, as he held the Stars scoreless for the opening 23:37 of the contest. The 28-year-old has posted back-to-back scoreless first periods dating back to Thursday, December 22, against the San Diego Gulls. Gillies was 23-for-24 through the first 40 minutes of play on Saturday and has allowed two five-on-five goals or less in three consecutive outings.

Roadrunners forward Boko Imama brought his usual physical play to Saturday’s matchup with the Texas Stars and added an assist on J.S. Dea’s third-period goal. Imama has tallied three assists over his last four outings and recorded a season-high three shots in the series finale against Texas. The 26-year-old has finished with an even or better rating in 12 of his 13 appearances this year, including a plus-three overall over his last four efforts.

“This one stings for us. We all worked hard and committed to the game we needed to play. We had lots of opportunities and [Jon] Gillies made some big saves for us. We were right there, we just didn’t get the results we needed.”

Roadrunners defenseman Dysin Mayo on Tucson’s effort in Saturday’s series finale with the Texas Stars. The Roadrunners and Stars were tied or within a goal of each other for 55:33 for the first 56:44 of the game.

After a high-scoring opening frame on Friday, Saturday’s first period between Tucson and Texas marked just the third time all season where the Roadrunners and their opponent were still scoreless after the first 20 minutes of play. Both teams took one trip to the man-advantage in the frame, with Tucson coming close to a goal with traffic in front of the Texas net. Texas edged out the Roadrunners in shots by a count of 15 to 13, as netminder Jon Gillies recorded the second-most saves in a period by a Roadrunners goalie this season. The Stars got on the board with the first goal of the night 3:37 into the second period, as Texas forward Riley Barber netted his 18th of the season to move into a temporary three-way tie for the league lead. The early five-on-five goal was the only score through the first 40 minutes of play, as the Roadrunners entered the third minute trailing the Stars 1-0. Both teams took two trips to the power-play in the middle frame, but the penalty-kill units held firm to each improve to three-for-three on the night. The Stars ended a scoreless stretch of 27:10 dating back to their goal in the opening 3:37 of the second period. Tucson answered back 1:11 later with their first goal of the contest, scored by forward J.S. Dea to extend his active team lead in goals to 13 and bring the Roadrunners back to within a goal with 8:02 remaining in regulation. Dea took a precision pass from Boko Imama to make it a 2-1 game in favor of Texas. With Tucson looking for the equalizer, the Stars retook their two-goal lead at 3-1 with 3:16 on the clock in regulation. Riley Barber lit the lamp once again for Texas with his league-leading 19th goal of the year, marking the only power-play goal scored on the night. The Stars put the game away with 2:14 remaining in regulation, as they took a deflected puck off a referee and scored on the empty net to clinch a 4-1 win in the series finale from Texas.