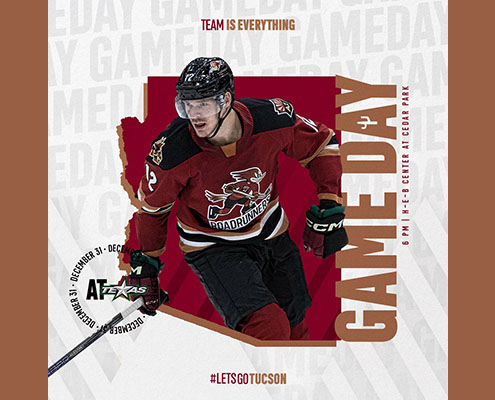 The 14-11-4-0 Tucson Roadrunners close out the 2022 calendar year with the second of two meetings with the Texas Stars at the H-E-B Center in Cedar Park. Tucson fell in Friday’s series opener by a score of 7-3, their first game since before the Holiday Break on Friday, December 23. Saturday’s series finale represents the 13th and final game in the month of December for Tucson, the second-most of any month this season behind January’s 14 upcoming contests. The contest also marks the fourth New Year’s Eve Game in Roadrunners franchise history, and the first for Tucson since 2019. The Roadrunners have a 2-1 record on New Year’s Eve entering the series finale with Texas, with wins over the San Diego Gulls and Ontario Reign in 2019 and 2017, respectively.

Three Things
1) The Roadrunners opened the scoring in the series opener against Texas with Cam Hebig’s second goal of the season and fourth of his career against the Stars. The 25-year-old has tallied a point in two of his last three outings, and in each of the last three series openers with Texas dating back to an assist on October 23, 2021. The assist also gave Elynuik his second point in as many games (2a) and his fifth point over the last eight outings (1g 4a). With 2:39 gone by in the opening frame, the goal was the fastest to start a game for Tucson since Travis Barron lit the lamp 2:19 into a contest against the Coachella Valley Firebirds on December 14, and the quickest score in an outing for Hebig in his AHL career.

2) Tucson is seeking their sixth Saturday win of the season in the series finale with Texas, the most for any day of the week for the Roadrunners this year. Their last Saturday game on the road was a 9-4 win over the San Diego Gulls on December 17, as Tucson has earned at least a standings point in seven of their last eight Saturday outings overall dating back to October 22 against Bakersfield. Tucson also came away with a 1-0-1 record in two Saturday-night matchups against the Stars during the 2021-2022 campaign, including a 4-0 shutout on their home ice on Saturday, October 23, 2021.

3) The Roadrunners continued the habit of scoring the fastest two goals in a game during Friday’s series opener, as Colin Theisen and Reece Vitelli lit the lamp 1:09 apart in the third period against Texas. Tucson set a franchise record for the fastest consecutive goals exactly two weeks before Saturday’s series finale with Texas on December 17 against the San Diego Gulls, with a pair of goals just ten seconds apart in the first period. The Roadrunners netted another quick pair of goals against San Diego on Thursday, December 22, when J.S. Dea and Curtis Douglas found the back of the net within 19 seconds of each other in the third period of their 6-2 win over the Gulls. Tucson has now scored consecutive goals within a minute and ten seconds of each other in three of their last six contests.

“I’m excited to be back, I watched every game to keep up with the systems. That way, when I was called back up, I knew what I was doing and didn’t have to think too much out there.”

Roadrunners forward Colin Theisen on returning to Tucson from the ECHL’s Atlanta Gladiators. Theisen found the back of the net in the third period of Friday’s series opener with Texas, his first outing back in the Roadrunners lineup.

Number to Know
23 – The number of different players to score a goal for the Roadrunners this year, after forwards Colin Theisen and Reece Vitelli each lit the lamp for the first time this season on Friday against the Stars. Five different Tucson skaters have recorded their first goal of the year over the last three games, as Victor Soderstrom, Devante Stephens and Curtis Douglas each found the back of the net on Thursday, December 22, against the San Diego Gulls. The Roadrunners have received offensive production from all across their lineup, as ten different players have reached double-digit points on the season through 29 games.

We’re Doing It Live
Tonight’s game will be broadcast live on AHLtv, as well as on the radio at FOX Sports 1450AM and the iHeartRadio app. Pregame coverage will begin at 5:45 with Roadrunners Warm-Up hosted by Jimmy Peebles, before “Voice of the Roadrunners” Adrian Denny has all the action from the H-E-B Center.