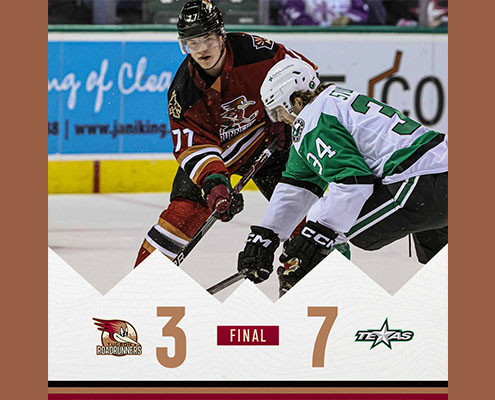 ROADRUNNERS RETURN FROM BREAK WITH LOSS TO FIRST-PLACE TEXAS STARS

Cedar Park, Texas – The Roadrunners fell to the Texas Stars by a score of 7-3 in their first game out of the Holiday Break Friday night at the H-E-B Center in Cedar Park, Texas. The Stars extended their lead in the AHL’s Central Division with the win, while Tucson moved to 14-11-4-0 on the season. Forwards Colin Theisen and Reece Vitelli tallied third-period goals in their first games since being recalled from the ECHL’s Atlanta Gladiators. Friday was the first game for Tucson since leading scorer Mike Carcone’s call-up to the Arizona Coyotes. Everyday skaters Laurent Dauphin, Adam Cracknell, Jan Jenik, and Travis Barron were also absent from the lineup, with three of the Roadrunners top five leaders in points not on the ice (Carcone, Dauphin, Cracknell). The Roadrunners and Stars will meet again Saturday night for the final game of the 2022 calendar year, before Tucson returns home for a four-game home stand beginning Friday, January 6.

Forward Reece Vitelli scored a goal in his AHL debut with the Roadrunners Friday night against the Texas Stars. Vitelli wrapped the puck around the back of the net and past Texas goaltender Anton Khudobin in the third period of his first appearance in the American Hockey League. The 21-year-old has notched 15 points in 26 games for the ECHL’s Atlanta Gladiators.

FIRST ON THE BOARD – Friday’s series opener between the Roadrunners and Stars marked the 18th time in 29 games this season where Tucson scored the first goal of the contest. Forward Cam Hebig lit the lamp 2:39 into the opening frame for his second goal of the season and a 1-0 Tucson lead. With the score, Hebig became the 11th different Tucson skater to net the opening goal of a game this season. The Roadrunners have now scored the first goal in 10 of their 15 road matchups this year and possess a 7-2-1-0 when doing so.

The Tucson Roadrunners recalled forwards Reece Vitelli and Colin Theisen from the ECHL’s Atlanta Gladiators ahead of Friday’s series opener with the Texas Stars. The pair of forwards lit the lamp 1:09 apart to open the scoring in the third period at the H-E-B Center for their first American Hockey League goals of the season. The series opener represented Vitelli’s Roadrunners debut after the 21-year-old led the WHL’s Prince Albert Raiders in points last season with 51 (25g 26a). Theisen returned to the Roadrunners roster after he notched 11 points (5g 6a) in 16 games with Tucson last season after finishing his college season at Arizona State University.

“I got out wide and chipped it around my defender. I was going to cut to the net, but it was kind of congested, so I went around it. I saw the net was open for a wraparound, and fortunately [the puck] went in.”

The Roadrunners opened the scoring in their first game out of the Holiday Break with an early goal by forward Cam Hebig. Hebig took a pass from Hudson Elynuik on a breakaway and backhanded the puck past Texas goalie Anton Khudobin for his second time lighting the lamp this season, giving Tucson a 1-0 lead with just 2:39 gone by in the opening frame. The Stars came back the other way and evened the score at 1-1 1:16 after Hebig’s goal. Texas took their first lead of the night later on in the frame, as they tacked on a pair of goals within 2:14 of each other for a 3-1 advantage just past the midway point of the first period. The remaining 9:26 of the period was without a score for either team, as the Roadrunners entered the first intermission trailing by a pair. The Stars kept rolling with the first goal of the middle frame, scored 3:29 into the period to push their advantage to 4-1. Another goal 3:27 later made it a 5-1 game in favor of Texas before the midway point of the frame. The Stars completed their second three-goal period of the night to grab a 6-1 lead with just under six minutes left on the clock in the middle frame. Texas kept the Roadrunners off the board in the second period, as the teams entered the final period of play with the Stars ahead 6-1. The Roadrunners started the third period strong with back-to-back goals scored by Colin Theisen and Reece Vitelli in the first 1:34 of the frame to turn a 6-1 deficit into a 6-3 game, as the pair were recalled from the ECHL’s Atlanta Gladiators prior to Friday’s contest. Texas answered back with the first power-play goal for either team, scored five seconds into their third man-advantage of the game to make the score 7-3 with 5:52 gone by in the third period. The final 14:08 of the contest marked the longest scoreless stretch of the night, as the Stars took the series opener by a count of 7-3.