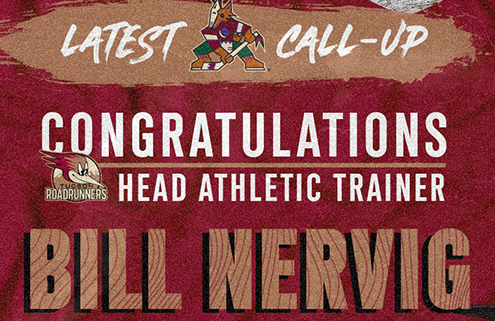 We’ve had 14 players appear on both the Roadrunners and Coyotes rosters this season, but you’re the first staff member to go up to Arizona this season. Tell us about the promotion up to the NHL full-time after filling in temporarily last month.

I’ve been telling my family that Santa Claus was pretty good to us this year. I’m very fortunate to be in a position here where an opportunity arose with the Arizona Coyotes, and they had faith in me to fill the shoes and keep everybody proud and do the job to the best of my ability, and that’s what I hope to do… It was a fun phone call to make to a number of people, to let them know that this was happening, and it makes me feel even better that the Roadrunners are in such good hands with Jordan Ellis taking over in that role.

Jordan Ellis was named Tucson’s new Head Athletic Trainer, you two worked together here for three years but that’s not all. You were both in Omaha, Nebraska together for a number of years.

Jordan started his athletic training career as a volunteer intern in my training room in Omaha, Nebraska (USHL), before he began his formal education in school. To have come here [to Tucson] and work with him in a professional capacity, and now to be able to hand the baton to him for his first head athletic training role feels good. Seeing Jordan grow up and turn into a heck of a young professional, I know he’s going to do a great job in Tucson.

Tell us about the road trip you took with the Arizona Coyotes about a month ago, they won a big game in St. Louis (November 16, Coyotes win 3-2) and kind of got hot with you on the trip. Then you came back, and we went on a nice run too.

Well let’s begin by saying that my presence has nothing to do with winning or losing, that is all the players and coaches, we’re just behind the scenes doing our parts. That was a fun road trip and a really cool experience. We do preseason games with the Coyotes, but to go on a regular season game and see a full building and the energy of an exciting win like that was a pretty neat opportunity and makes me even more excited to experience that routinely for the next four months.

You got a taste of the NHL on that road trip but now you’ll be up there full-time. While you won’t be too far away, what will you miss about Tucson?

My family, to be honest. They’re staying down in Tucson for the remainder of this season. We’ll do a lot of commuting back and forth and make sure we see each other as often as possible, but they have school and jobs and everything in Tucson so that that’s going to be the part I miss the most. The second though is going to just be the players and the staff on the Roadrunners, it’s a fantastic little family we have in Tucson and it’s a fun group. When we would break apart for the summer and not see each other, it was like getting back together with brothers when we would see each other after the offseason. I’m going to certainly miss those guys and I look forward to the opportunity to rub shoulders with them again hopefully before too long.

You’ll likely get a chance to see a lot of those players go up to the Arizona Coyotes soon as well.

Yeah, we’ve had so many players move up this year that I walked into the building today and it was almost like being in the Roadrunner’s locker room from last year with so many familiar faces.

Have you looked at the Roadrunners schedule to see when there might be a game where you could attend with family and sit in the stands and watch a game at the TCC as fans?

There’s a few coming up, but protocols are the important part. I might have to wait a little bit until rules relax, but I definitely would like to come down. One thing I’ve never done is sat in the stands and watched my team play, and it’s close enough still that I hope to see it and see the guys I know play and play as well as know they can.

Before you got the call to the NHL you sustained an injury with us taking one for the team, but the eye is looking pretty good. Tell us what happened in that televised game on December 11.

Well, my wife had no idea until I got home after the game, she wasn’t watching that part, so I got lucky and slid it past her. I was looking down for just a moment and every single person on the bench saw the puck flying in except for me, and I knew it was there right when it hit my face. It didn’t knock me out, but it did fracture my face in a couple of places, but nothing that was displaced or needed surgery. And our awesome medical team down there in Tucson, Dr. Caroline Kacer from DENTALPROS stitched me up and we had our ER doctor and Roadrunners Medical Director, Dr. Allison Lane, take a look at me, and everybody was good with me going back out. Jordan covered the bench in my absence, and I was back out there in the second period finishing it up. It still hurts to chew anything too hard, and it’ll be another month or so before everything is healed fully, but the scar looks good the bruising is going down. I think I’m going to be fine but I’m definitely paying attention now. It almost happened again in Ontario, one came straight at my face teeth-high, but fortunately I saw it and was able to duck.

Who was it and how did it transpire?

It was Cam Crotty. He was throwing a pass and it got tipped. He brought me brownies the next day to say sorry, though.

You were with the same organization for almost two decades with Omaha in the USHL. It was a good spot, but a couple summers ago an opportunity came up with us. What told you it was the right move to come to the Coyotes Organization and join us in Tucson?

Jordan Ellis was already here in Tucson and as soon as the opportunity arose, he was on the phone with me telling me to send in my resume, so I did and it all worked out. He had already been with Tucson for a year and that made the transition to the AHL so much easier. I can’t say enough good things about that young man and he’s going to do so awesome, I’m just thrilled for him.

We have a lot of good pieces and good people on our staff in Tucson, and those are the guys that set the tone on a daily basis in and around the locker room.

It’s such an awesome group, the one problem when you have such good people around is you can’t keep that band together for too long because other opportunities are going come knocking for everybody in that group. It’s fortunate that our group has stayed together as long as it has, and hopefully whoever comes in and fills those other roles as other guys move on is just as good because it’s a special thing in Tucson.

Q and A With Roadrunners Defenseman Ty Emberson
Scroll to top