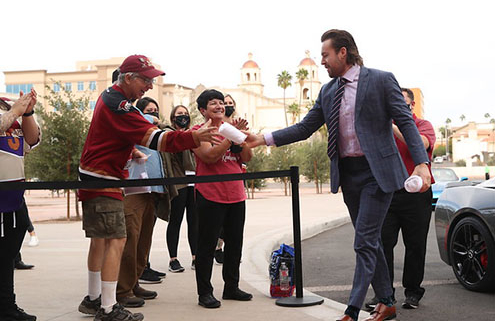 Tucson, Arizona – The Tucson Roadrunners, AHL affiliate of the Arizona Coyotes, will host the Bakersfield Condors Saturday at 7 p.m. and Sunday at 4 p.m. as part of their Home Opening Weekend.

Tickets for both contests, as well as all 36 home games on the season are available now at TucsonRoadrunners.com/Fun.

Opening Night presented by the Arizona Daily Star and its festivities kick off at 4 p.m. on Saturday with the traditional Roadrunners Red Carpet Reception to welcome the players and coaching staff into the Tucson Arena, followed by the opening face-off at 7 p.m. Once inside the Tucson Arena, there will be a Food Drive for Impact of Southern Arizona and the first 1,500 fans will receive a Roadrunners Rally Towel courtesy of Williams & Associates.

The Roadrunners will be back on the ice the following afternoon for a rematch with Bakersfield at 4 p.m. on Sunday, October 23. The first of seven Family Days on Tucson’s schedule will feature a Pre-Game Trick or Treat courtesy of Raytheon, and a Post-Game Open Skate with select Roadrunners players.