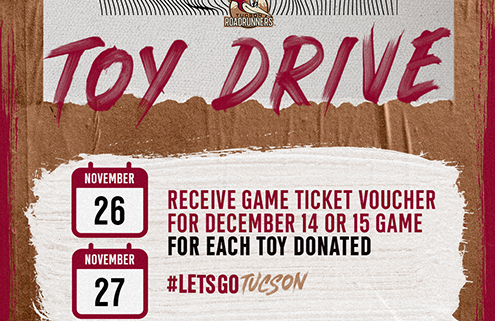 Tucson, Arizona – The Tucson Roadrunners, owned and operated by the Arizona Coyotes are hosting a Toy Drive for Banner Children’s Diamond Children’s Medical Center at the entrance of games Friday and Saturday at 7 p.m.

Fans who donate new toys when entering Tucson Arena this weekend will receive a ticket voucher for each toy donated that can be redeemed to watch the Roadrunners Tuesday, December 14 or Wednesday, December 15 against Henderson.

The Roadrunners and Banner Children’s Diamond Children’s Medical Center are also welcoming fans to donate online should they prefer or if they aren’t able to bring toys for the weekend. Donations can be made by clicking HERE.

It’s a fact: Kids need to be kids. Since the need to play is never more important than during a stay in a hospital, toys can bring comfort and hope to a child in crisis.

Kachinas Coming Back
The Roadrunners fan-favorite Kachina jerseys, which debuted in 2019, will be back at the Tucson Arena for the pair of games this weekend, when the Roadrunners host the Abbotsford Canucks for the first time in franchise history. The weekend will be full of festivities, with a cowbell giveaway to the first 1,000 fans Friday night. Fans can purchase a discounted ticket which includes a free Kachina hat for either game by clicking HERE.

RRTV In The Community: Thanksgiving 2021
Scroll to top